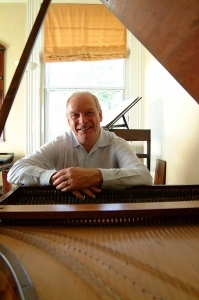 What is your earliest musical memory?
My earliest music memory is of my mother playing Bach partitas on the piano; she was a good amateur pianist and had met my father when singing in the London Bach Choir. After the War, and with a large family to bring up they were not able to continue with this, but all five of us children had a music education learning instruments and I was also a choirboy.

What sparked your interest in early music – was this during your studies at Pembroke or later?
I was interested in historical keyboard music when I was at school; I think perhaps I had heard George Malcolm in concert, but I certainly sought out harpsichords. When I went up to Cambridge I initially read Classics, but tired of this and took music courses. Working with colleagues such as David Munrow (with whom I founded the Early Music Consort) shaped my early musical career further.

You have worked with many musicians and musicologists over the years, are there any you would pick out as particular influences?
In terms of tuition, I would have to say that a number of my teachers have shaped my career, including Raphael Puyana and George Malcolm. The Cambridge based harpsichordist Mary Potts was particularly influential as a teacher; I even lived in her house for a while and particularly enjoyed playing her Schudi-Broadwood harpsichord of c.1775, which had formerly belonged to Arnold Dolmetsch whose son Rudolph had been her teacher. One cannot of course omit the great Gustav Leonhardt from the list of influential teachers, although what you may not have known was that he shared Raymond Russell’s love of fast cars! Thurston Dart was also an important figure in my early career, in that he proved that it was possible to combine a successful academic career with a performing one and that the two complemented each other.

How did you first discover the Russell collection?
Mary Potts was a friend of Raymond Russell, so I knew his book on the harpsichord and clavichord and his collection before it moved up to St Cecilia’s Hall. I would like to return to Edinburgh when time allows, to see the Russell Collection again, but also to see the Mirrey and Sir Nicholas Shackleton Collections, as I knew both of these in their former homes.

How did you start putting your own instrument collection together…?
Like most performers, my first instrument was bought as a playing instrument. I had connections with Ann Feldburg’s workshop in Kent and I borrowed and later bought an instrument from her for my general performing needs. Having worked through the available modern instruments and having been able to play Mary Potts’ eighteenth-century instruments, I eventually acquired a single-manual Kirckman harpsichord and built my collection up from there. I am particularly fond of the clavichord, and have a number of fine examples. It is also easier to collect original clavichords, whereas highly decorated or important harpsichords are now far beyond the reach of the average performer’s budget.

… and is there anything you would particularly like to acquire for it if you had unlimited funds?
It would have to depend on what music I was playing at the time the unlimited funds appeared! If I were playing Scarlatti I might have one shopping list that would be entirely different should I be playing music by another composer…

Do you often get requests for musicians for access to your collection?
Surprisingly few; although at the moment we are in the middle of building work, I would like to encourage performers or musicologists to use my collection as there are some fine instruments, including a piano formerly owned by Weber.

The University of Cambridge are building up their interest in early music after a period when it was less popular, and now have a baroque orchestra and a Handel opera society. Unfortunately, the University had already sold much of its instrument collection so it would be nice to encourage students to make some use of my own collection.

Cambridge Professors such as John Rink, whose particular interest is the music of Chopin, are encouraging a return to the idea of historically informed performance. We need to break down the philosophic stance that this belongs only to the baroque and classical periods (or earlier) and recognise that it is equally important to consider instrumentation in the music of Stravinsky or Brahms as it is for Mozart or Bach.

There is so much about historically informed performance and the development of instruments that we as musicologists, organologists, or so-called early musicians think has been ‘discovered’, but this is unfamiliar to the concert going public or even to the general musician. Making instrument collections available to performers to discover for themselves is one of the ways we can encourage more thought on the matter.

What are your plans for future performances and lectures?
One of the joys of being both academic and performer is that the two are so interrelated: I am especially involved in work on editions of Mendelssohn and Martinů, and the best test of an edition (and the best way to find any mistakes) is to play it.

Which piece of music plays continuously in hell?
All unasked for music is hell! I am very much a supporter of the campaign to get rid of background music as it devalues the idea of listening to it and concentrating. I also wonder what the physical effects of so many people wandering around with loud music being piped directly into their ears by headphones.

… and in heaven?
The sheer joy of music is that there is such a huge variety to choose from; there is no universally perfect piece, and anything would soon become hell if listened to on a constant loop.

What would your epitaph be?
Perhaps I could paraphrase John Kitchen’s choice and say, “A general pause is a joy forever”.