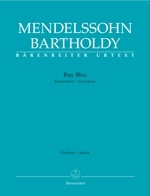 The concert-overture “Ruy Blas“, the fourth in Bärenreiter’s series of Great Mendelssohn Overtures in Urtext editions, was composed in 1839 for a performance in Leipzig of Victor Hugo’s play (1838) of the same name. Mendelssohn’s effective overture calls for four horns and three trombones giving it the largest orchestral forces of his concert overtures.

Mendelssohn claimed to have written the overture in 24 hours and had the parts copied just in time for rehearsals and the first performance a few days later. As with many Mendelssohn compositions, “Ruy Blas“ has come down to us in more than one version.

The new Bärenreiter Urtext edition presents Mendelssohn’s autograph score of the first version and the final version (here published for the first time) back to back. The new edition contains an informative introduction and a detailed critical commentary with facsimile examples of the sources.