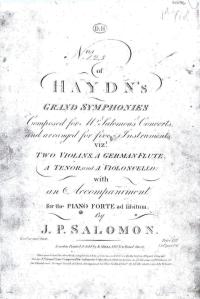 In August 1795, as Joseph Haydn was about to leave for Vienna, one of his final acts in London was to sign over to the impresario and orchestra leader J. P. Salomon the rights on the first six of the London symphonies. In late February of the following year Haydn despatched from Vienna the contract for the remaining six, handing over to Salomon the right to exploit all twelve as he saw fit.

It’s interesting that Salomon left the dissemination of the symphonies in their orchestral form to others; the music publishers André, Artaria, Simrock and Imbault were quick off the mark with editions. From his collection, which consisted of the complete performing parts of all twelve symphonies, along with the autographs of Nos 95 and 96 and scores freshly copied from the autographs of the remaining ten — material which would pass, at his death, to William Ayrton and through him to the Royal Philharmonic Society — Salomon resolved to make two separate reductions of the entire set for home enjoyment or chamber performance. 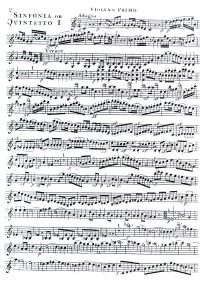 In publishing them it is clear that his aim was the widest dissemination of these remarkable works. First came transcriptions ‘Adapted for the Piano Forte, with an Accompaniment for a Violin & Violoncello, (ad libitum)’, a purely sociable prescription since the entire musical content is lodged in the keyboard part. These came out in three uneven batches between June 1796 and October the following year: four at first, then two, then the final six together. A fair representation of Haydn’s symphonic texture could hardly be expected of this trio treatment. Salomon answered that objection in his fuller ‘quintetto’ arrangements — announced in The Times on 19 June 1798 — ‘for five Instruments, vizt. Two Violins, a German Flute, a Tenor, and a Violoncello: with an Accompaniment for the Piano Forte ad libitum. ... Pr. 15s ... NB A separate Bass Part pr. 2s 6d’. Crucially, the fuller arrangement decreases the role of the keyboard instrument, and the flute and viola come in as extra melodic and colouristic resources.

As a vehicle for orchestral transcription this scarcely precedented combination proved immediately successful. Salomon negotiated publication in Bonn with Simrock, who had already issued the trio arrangements; this was announced in March 1799. After Haydn’s death in 1809, Salomon transferred the material to his colleague Robert Birchall; he in turn passed it on to his son-in-law Richard Mills. Both Birchall and Mills — the latter as late as 1830 — reissued the quintettos with their own revisions. It has always been assumed erroneously that they were identical and have unwittingly been used thus for reference and recording, e.g. by Harry Newstone for his provocative Eulenburg edition of the London symphonies (1992). Fortunately, Salomon’s autograph score, used for the first engraving, not only clarifies his intentions, but in it (as a composing copy) we can trace his procedures and experiments, and garner evidence both of the changes that overtook the London versions of these pieces, and of that collaboration between author and performer which was so much part of eighteenth-century musical practice. With Salomon we have the contribution of a performing musician who worked alongside Haydn from the conception of many of these symphonies, and saw them through first (and consequent) performances and eventually into print in a variety of forms.

‘XII GRAND SYMPHONIES , By HAYDN, arranged as Quintets, by J. P. SALOMON. (The original Score in Mr. Salomon’s hand-writing.)’ is handwritten in a printed nineteenth-century cartouche on the title page of Salomon’s score, originally two volumes and now bound as one. The description and the binding are probably the work of William Ayrton, heir to Salomon’s music collection at his death in 1815. There is no mention of the volume in the sale of Ayrton’s musical effects in 1858, the only clue to its whereabouts for nearly a century being a bookplate of the collector Edward Wrey Whinfield (died 1904). The adventures by which it crossed the Atlantic and ended up in the 1950s in the hands of the noted Hollywood film-score composer Alfred Newman are obscure; but at his death Newman’s collection of music scores passed to the Cinema-Television Library and Archives of Performing Arts, University of Southern California in Los Angeles.

The manuscript is written on English paper 9 1/2 x 11 3/4 inches, watermarked with a crown over fleur-de-lys in shield and ‘GR 1794’. The date (if any indication of the year of composition) is surprisingly early; Salomon had no contract with Haydn until the following year, and yet the hasty script, particularly in the later symphonies, is obviously under pressure — as if to suggest performances of the quintettos in MS before publication, maybe even before Haydn’s departure.

The score is laid out for Flauto, Viol. 1mo, Viol. 2do, Viola and Violoncello (replacing ‘Basso’ which has been erased at the start of Symphony I, i.e. 97). There is no indication of an independent double-bass line in the arrangement; the separate ‘Bass’ part advertised by the publishers was probably to free the cellist from the inconvenience of playing from the left hand of the pianoforte part. Salomon’s score contains no written-out keyboard part; the bass line is figured at first, fully in Symphony I, sparsely in II, and thereafter not at all.

For a fuller study of the relationship between these arrangements and other sources, and a survey of Salomon’s working methods, the reader is referred to the present author’s “In praise of arrangements: the ‘Symphony Quintetto’”, in Studies in Music History presented to H. C. Robbins Landon (ed. Otto Biba and David Wyn Jones), Thames & Hudson, London, 1996, p. 82ff.

For this edition of Symphony I/97, Salomon’s manuscript is the prime source of the quintet parts; the keyboard part is taken from the printed material published by Salomon (London 1798, reissued by Birchall c.1820), and this has also been used to supplement problematic passages in the manuscript. The manuscript contains rehearsal letters probably added by Salomon (the letter ‘I’ is avoided, in the German manner) and these have been included in this edition as an early example of such under-examined devices. From their sometimes surprising frequency and positioning (always before an up-beat) one deduces an experienced practical director with prior knowledge of difficult passages. The Critical Commentary gives important divergences, together with references to the original orchestral version and occasional ossias in the main text.

Many of the changes in bowing and dynamics (such as the ‘sf’ marks added throughout the Menuetto, and Salomon’s marking up the ‘brass’ parts above the prevailing dynamic in the second and fourth movements) will be intriguing and possibly useful to orchestral directors. For once, the question of whether or not to play repeats in a Menuetto da capo is irrelevant, since both minuet and trio are written out in full — a useful confirmation of what was then considered the norm. (For more on the subject of repeats and the tempos of minuets, see the present writer’s ‘In praise of the minuet and trio’, Early Music, vol. XXX/2, May 2002, pp. 236–51). The famous violin solo provided by Haydn at the end of the trio for ‘Salomon Solo ma piano’, the arranger graciously gives to the flute.

Symphony 97 is the only one in Salomon’s MS with an (almost) fully figured bass line (the figuring gives up after bar 82 of the last movement), although some awkwardness of script and placement shows that it was added later (and possibly not by Salomon). The keyboard part published by Salomon in 1798 is probably the work of another hand, and frequently adopts solutions other than the figuring suggests. However, as a fully written-out version of what we must consider an acceptable late-eighteenth-century symphonic continuo part, it is valuable in its simplicity and effectiveness. 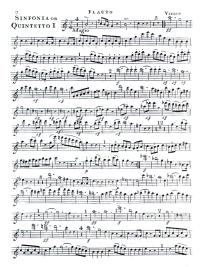 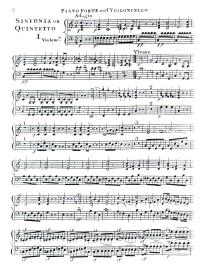