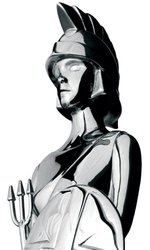 In 1985 Christopher won the Brit Award for Best Classical Recording for Vivaldi's Four Seasons with Academy of Ancient Music. The album was very successful, selling more copies in CD format than LP and cassette combined.

The main focus of the award was Christopher's academic approach and his intention to produce the most authentic sound possible. Interestingly, at the same ceremony was Sting, winning the award for Most Outstanding Contribution with The Police, who was very surprised that the recording could be so well received purely in virtue of the fact that it was authentic. Christopher writes on this topic in a forthcoming article, 'Musical Identity' (to be published by Cambridge University Press in Identity, part of the Darwin College Lecture Series):

"From the graphic artist's viewpoint, all musical performances are, as it were, cover versions, since only Mozart playing Mozart could be the real thing. I well remember Sting, at a Brit Awards ceremony many years ago, being surprised, and possibly a little outraged that the Academy of Ancient Music had won a prize for simply playing Vivaldi 'as he would have played it' ('You didn't do anything to it?', he asked, incredulously); now, I am intrigued to see, he records Dowland."

To see images and the video of the presentation and acceptance speech Click Here.