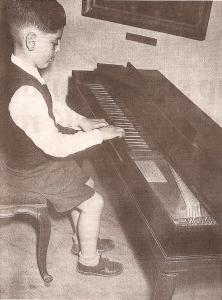 Alongside an article about Daniel Barenboim in The Times on 24 January was a photograph of Barenboim, apparently, at a "spinet". The keyboard in question was in fact a clavichord, as pointed out by Christopher in his letter of 28 January:
Sir, Once again a bicycle is misidentified as a motor car: the instrument that the nine-year old Barenboim is playing so tentatively is one of Mozart's clavichords (he owned several throughout his life) and not a "spinet" (an instrument he never possessed). The note that can be seen attached to the soundboard is from Mozart's widow, Constanze, telling us that "on this Clavier my late husband composed Die Zauberflöte, La Clemenza di Tito, the Requiem and a new Masonic Cantata in the space of five months". 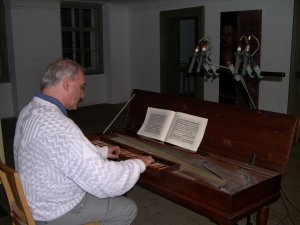 Christopher is pictured here playing the above-mentioned clavichord in Mozart's 'Geburtshaus' for his Secret Mozart recording.