A few interesting contrasts to report from June 2005’s travels. First in Germany, where rehearsals with the Bamberg Symphony Orchestra took place in Bamberg itself, though the concerts were all given in the Residenz in Würzburg, some 50 miles away.

Bamberg itself is that rare thing, a real old German town undamaged during the 20th century but still not so over-run with tourists as to be unbearable. Many well-preserved mediæval streets, a very sympathetic University quarter, fine bridges (at least one of them, anyway) and a quiet river with ancient housing down to the water’s edge. An elegant old baroque hospital has been converted into a hotel and restaurant (complete with original Baroque Chapel)

Good menu, and imaginative variations even on asparagus at the height of the Spargel season; wine list with many local wines by the glass and (almost) music-free (very low level).

In the centre of the old town (50% antique shops) and by the river is the restaurant of the Hotel Brudermühle, run by Georg Vogler and family. Dining either in the atmospheric (but not tarted-up) interior or — better for the summer — outside overlooking the river on the “idyllic terrace”. Good fish, especially local trout, and wines grown almost within sight of the tables. 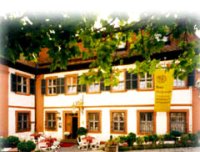 Würzburg is a contrast to Bamberg in many ways, but visually largely because of war damage and reconstruction. Even the enormous baroque Residenz (to the design of Balthasar Neumann) is largely a post-war reconstruction (at the moment the Tiepolo staircase painting is being renovated and therefore not visible). But the music room still retains the atmosphere of an 18th century interior, and the view onto the formal terraced gardens improves as the evening wears on and the avenues of flares are lit. Long resonance for music, and a very long interval for garden promenades. The town itself is more utilitarian, but full of tourists, with consequently dire results on the restaurants. For post-concert dining, the only regular and reliable haunt I found was the Italian restaurant Bella Napoli, opposite the Hotel Rebstock (the oldest and nicest family-run hotel in town) in Neubaustrasse. Very firm in its own Italian ways (no quattro stagioni pizzas and not an anchovy in sight), but open until midnight (and what little background music I heard came from the kitchen where the chef obviously had a taste for mediaeval music and Bartok quartets). Again, wines are local and grown in the almost vertical vineyards that cover the steep slopes up to the Schloss.

Much more exotic contrast came last week with a concert in the Summer Festival in Istanbul; here again the march of muzak was apparent: in the nicest old Turkish-style hotel (The Green House — Yesil Ev — very close to the Blue Mosque, Hagia Sophia and Topkapi) now has wall-to-wall light music and Mozart playing rather too loudly all day, and so can no longer be recommended for its peaceful courtyard with fountains etc.: even the traditional hammams are “improved” with night-club music (and the two we checked — Cagaloglu and Cembalitas — also gave more desultory scrubs than previously). However, a great discovery was the roof terrace of the Armada Hotel, which has no music, fine Turkish food by candlelight and the city’s best views of all the main mosques plus a view over the Bosphorus to Asia (and the moon was the lowest and largest for the last 18 years the evening we happened to be there). 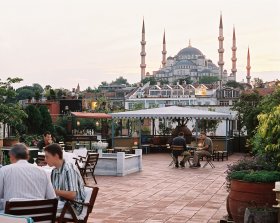 A must of a different order is a visit to the Anatolian House Restaurant and Café, not far up the tramway street from the Blue Mosque; this is full of small restaurants in side streets, but none with owners to compare with Oktay who talks all passers-by into his establishment. Even when we said we were after no-music, he bowed like an opera star and waved us towards an adjacent restaurant (also his, same menu) and had the music turned off.

The next wavering diners to pass by were then told what an advantage it was to have no music to spoil their conversation — all with flourishes, bows, hand on heart and flow of patter to melt the stoniest heart. Both food and wine were excellent as well (with special discounts on absolutely everything “just for us”), but the sales-pitch is the finest thing.