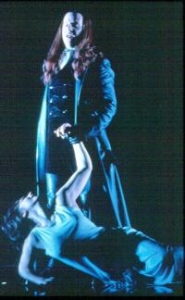 Handel’s Italian operas, about 40 in total, show a remarkable consistency in quality. He rarely wrote a bad opera, judged in terms of musical fluency and balance: on the other hand, there were peaks of excellence when Handel produced a run of outstanding works. One such peak comes at the height of the success of the Royal Academy opera company in 1724–5, with Giulio Cesare, Tamerlano and Rodelinda, and another about a decade later with Arianna, Ariodante and Alcina. The circumstances which brought forth the second group were very different from those of the relatively stable and confident Academy period. After a series of scares and alarms — in which power struggles in the political community of opera patrons, in the Royal family and in the musical profession played a part — a rival opera company to Handel’s was set up in London during 1733, with support from the Prince of Wales. During 1734 Handel lost his principal counterbalancing Royal supporter, Princess Anne, when she married Willem of Orange in March and took up residence in Holland. In December 1733 one well-informed observer had commented: ‘How two Opera Houses will subsist after Christmas, I can’t tell; but at present we are at some difficulty for the Support of One; & Mr. Handel has been forc’d to drop his Opera three nights for want of company [i.e. for lack of audience].’

It was true enough that London’s opera audience in the 1730s was barely sufficient to support one company, and in the long term the fission of the mid-1730s destroyed Handel’s operatic career: things were never the same again. The (always tenuous) stability of patronage was lost, and with it the chance to develop a coherent long-term artistic policy. In the short term, however, Handel was preoccupied during the years 1733–5 simply with the survival of his company from one season to the next.

The initial effects of the competition from the Opera of the Nobility were attenuated by the fact that, for the season of 1733–4, Handel retained a base at the King’s Theatre, Haymarket, which was London’s premier Italian opera house. This may have been the consequence of a five-year agreement with the Royal Academy directors in 1729 for the use of the theatre. No such security attached to the employment of the singers, however, and Handel lost nearly all of his best soloists to the Nobility company: of the stars, only the soprano Anna Maria Strada remained on his side. Since the singers constituted at least one third of the attraction for audiences (the other elements being the music and the settings) this was a serious matter. Most serious of all was the loss of his leading man, the famous castrato Senesino, to the rival company. The participation of a castrato primo uomo (‘first man’) was an essential ingredient for the success of an Italian opera company, and fundamental to the conventions of the genre of Italian Baroque opera itself. The high voice symbolised, musically, the dominant role in the drama: tenors and basses, if they were included at all, were confined to secondary roles as (for example) priests, servants or old men. There were some exceptions but it was very rare for any lower voice to be given comparable dramatic and musical status to the leading castrato.

In order to obtain a replacement for Senesino, Handel had to set a system of communications in continental Europe to work for him: professional musicians living abroad played a part, but so did political diplomats, because leading opera singers were often employed in circumstances of direct political patronage. Handel was fortunate to secure Giovanni Carestini, who was in the midst of a successful career in Italy and, more recently, at Munich under the patronage of the Elector of Bavaria. Soon after Carestini’s first London appearance he was described by one opera-goer as ‘an extream good singer’, and the nature of his talent is apparent from the music that Handel wrote for him. While Senesino seems to have made his mark by combining musicianship with stage presence, Carestini may have relied more on straightforward musical virtuosity. Handel’s music for him includes many arias whose effectiveness depends on the swift and accurate delivery of semiquaver roulades, over an energetic and forward-thrusting harmonic framework. It was Carestini who is said to have initially resisted singing the aria ‘Verdi prati’ in Alcina because its ‘simple’ style did not display his talents. Arias such as ‘Con l’ali di costanza’ and ‘Doppo notte’ from Ariodante (the latter displaying Carestini’s full two-octave range from a to a" — Handel wrote for him in the soprano clef) we might describe as typical Carestini pieces, and they must have been thrilling for the original audiences. But Carestini could be forceful in other types of aria as well, such as ‘Scherza infida’ in Ariodante, which must rank as one of the masterpieces in our gallery of Handel’s best musico-dramatic arias. The fact is that, particularly in Ariodante, Handel was able to couple Carestini’s musical talents with powerful dramatic situations: ‘Scherza infida’ conveys the jealousy and desperation of Ariodante after the discovery of Ginevra’s supposed infidelity, while the other two major arias mark, respectively, Ariodante’s delight and confidence at the prospect of his union with Ginevra (though any experienced audience would suspect that such untrammelled bliss in Act One indicated trouble ahead), and his moment of conviction that his problems are nearing conclusion. The emotion released in these arias is expressed in directly proportional musical structures: Handel’s treatment of the da capo aria is here at its most expansive. The arias are long as well as demanding, and Carestini must have been a singer of considerable stamina. He was at the height of his physical powers — about 30 years old — when he sang Ariodante.

Handel’s new opera for the 1733–4 King’s Theatre season was Arianna and the programme also included a new serenata (Parnasso in Festa) to celebrate the Princess’s wedding, but the rest of the repertory consisted of revivals of operas and oratorios, adapted where necessary to the new cast. At the end of the season, Handel’s time at the King’s Theatre ran out, and the Nobility Opera moved in. Handel persuaded the theatre manager John Rich to allow him the use of the new theatre at Covent Garden for the next season. This was smaller and further away from the ‘West End’ opera patrons than the Haymarket building, though it was near the famous Drury Lane theatre, but it proved entirely adequate. The move involved no musical compromises — Handel took his cast and, as far as we know, his full orchestra with him — and, if anything, he looked for ways of giving his operas additional attractions to lure the audiences away from the Nobility Opera. Principal among these additional attractions was a troupe of French dancers under the direction of Marie Sallé. The theatre may also have been equipped for scenic effects of a rather different type from those at the Haymarket.

Ariodante was composed in the summer and early autumn of 1734, between the two seasons: this accorded with a common (and sensible) practice of Handel’s, to prepare a score before rehearsals started and, incidentally, while the natural daylight gave him a longer composing day. Normally, since Handel was a fluent and experienced operatic composer, he could turn out a three-act score within a month but in this case the process was unusually protracted. He began the overture, presumably at his Brook Street house, on August 12 and drafted the first two acts at something like his normal speed, finishing Act One on August 28 and Act Two on September 9. In a letter dated August 27 Handel spoke of having just returned from ‘the country’. There are some local anecdotes that sections of the opera were composed at Tunbridge Wells, but this seems rather unlikely for a man who liked to work surrounded by familiar objects and resources (including sources of inspiration in the way of musical ‘borrowings’), and it seems more likely that he took a short holiday before tying up Act One. After September 9, however, there was a gap, and the score was not completed until October 24.

One cause for the delay was almost certainly that Handel’s resources for the next season were only slowly clarified. The first two acts were orignally drafted for Lurcanio and Dalinda as soprano-clef and alto-clef roles respectively. These presumably related to Handel’s expectations, based on the singers from the previous season. Of the pre-season changes, the most significant was the arrival of an ex-chorister from the Chapel Royal, John Beard, for whom (as a tenor) the music of Lurcanio was adapted. The new singer for the role of Dalinda was also quite youthful, the soprano Cecilia Young, later to marry Thomas Arne. The incorporation of Beard into the company may have preceded that of Young, whose music seems to have been adapted at a later stage in the autograph’s development. The, provision of the dances was also a late task, probably undertaken after the main autograph had been completed. Fortunately the structure of the opera allowed for the introduction of ballets at the end of each act. In Acts One and Three the ballets are court entertainments, to be watched by the actor-singers. The arrangement at the end of Act Two is yet more cunning, as Ginevra’s distracted state conjures up visions which are represented by the dancers. It is uncertain whether Handel’s most ambitious scheme for the end to Act Two, concluding powerfully with a short accompanied recitative, was carried through to performance: the sources are rather confused, not least because Handel lifted the dances en bloc for re-use in his next opera, Alcina (as an incidental result, Ginevra’s final recitative was printed in the wrong opera during the nineteenth century). But in a modern performance this spectacular ending seems too good to miss.

Handel did not introduce Ariodante immediately into his Covent Garden season, which began in November 1734 with a revival of an old opera, Il pastor fido: this might be better described as a re-revival, for Handel had produced it earlier in the year with new music for Carestini, and now extended it further with a new prologue featuring the dancers. A revival of Arianna followed, and then Oreste, a full-length ‘self-pasticcio’ opera of Handel’s music. He was keeping his best original work for the new year. The name of the opera had been known even before the season began, because a London newspaper had reported on November 4 that Handel had ‘waited upon their Majesties with his new Opera of Ariodante’. This was part of a successful bid to keep the Royal subsidy which had previously been given to Handel for productions at the King’s Theatre, and perhaps the King and Queen had some sort of preview performance on that occasion.

Ariodante came to the stage on January 8, 1735, and ran for eleven performances: there was also a brief revival the next season. For the original production, in addition to Carestini (Ariodante), Strada (Ginevra), Lurcanio (Beard) and Dalinda (Young), the leading singers included the contralto Maria Caterina Negri as Polinesso: Handel had no ‘second man’ (that is, second castrato) in his cast, so this second male lead was played by a woman. The team was completed by the bass Waltz (as the King) and another tenor for the minor role of Odoardo.

Donald Burrows is Chairman of the Handel Institute, Professor of Music at the Open University and editor of the new edition of Ariodante for the Hallische Händel-Ausgabe. This article was originally written to accompany the English National Opera’s co-production with Welsh National Opera of Ariodante at the Coliseum, London, in March 2002.