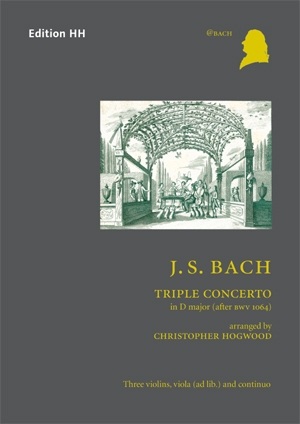 Dispensing with the orchestral tuttis and including a new (optional) viola part, this new version will be suitable for smaller chamber ensembles with a continuo section of cello, double-bass and keyboard. The textures are very similar to those of Vivaldi's Op. 3 concertos and the three violin parts require a similar brilliance of technique.

The precedents for this arrangement of Bach's concerto for three harpsichords and strings BWV 1064 can be found in earlier baroque concertos for multiple violins without ripieno orchestra, such as Vivaldi's first published concertos, Op. 3 (L'Estro Armonico), and similar works by Leonardo Leo, Van Wassenaer and Telemann for either three or four solo violins. Laying no claim to reconstruction according to historical evidence (which in any case is insufficient since many of the surviving sources are post-1800), the arrangement has been made for practical musical purposes for inclusion alongside other repertoire for three violin soloists without ripieno players, Pachelbel's Canon and Gigue being just one example of this popular scoring. In its first version this arrangement was prepared for performance and recording by members of the Academy of Ancient Music, and many of the subsequent revisions resulted from suggestions made by the performers, to whom much of the credit should be given. 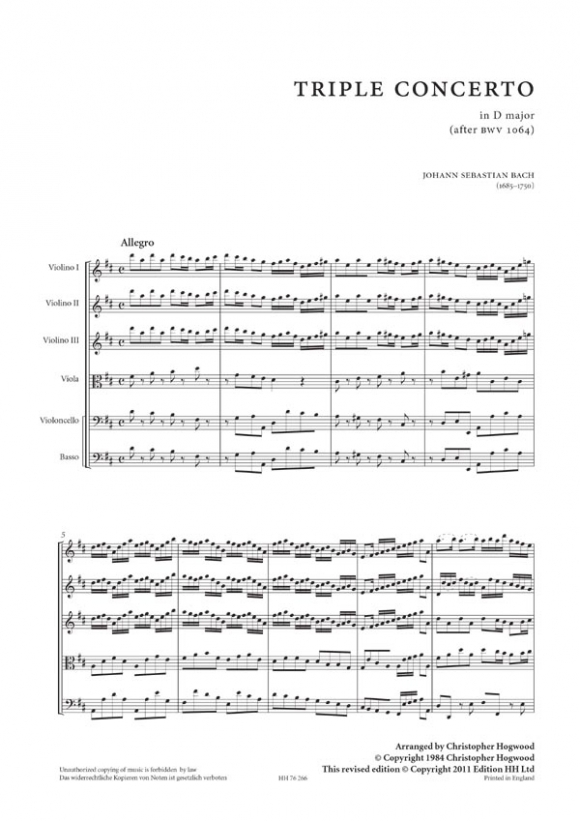 No autograph of Bach's original has survived and the work is now preserved in some nine manuscript copies (including a score by his pupil J.A. Agricola); in five of these the piece is in C major, in the other four in D major. Both this and the other Concerto for three harpsichords (BWV 1063) have long been suspected of being based on earlier Italian pieces; Arnold Schering suggested Vivaldi or Torelli on the grounds that the formal design of the first movement was untypical of Bach, and he was also the first to point out the prevalence of violinistic figuration in the keyboard parts. The evidence of similar transcriptions by Bach where direct comparison with the original is possible, such as his version of the B minor concerto from L'Estro Armonico for four violins, shows that they would normally be transposed down a tone to better fit the range of the harpsichord, and a new accompaniment for the ripieno strings devised - in some cases the involvement of junior Bach family members is suspected; D major, therefore, is most likely to have been the key of the original and is certainly more suited to the violin.

This new arrangement is available now from Edition HH as a full score and parts. 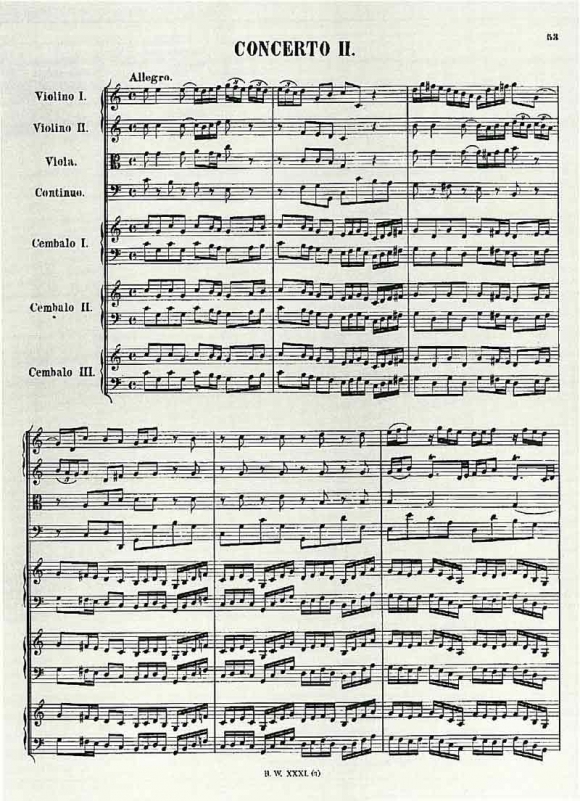 Paul Graf Waldersee's 1885 edition of the concerto for three harpsichords and strings BWV 1064 for the Bach-Gesellschaft Ausgabe, vol. XXXI (3), p53, showing bb.1-6 of the first movement.