Francesco Geminiani Opera Omnia is an editorial and publishing project that presents all the works of Geminiani (1687-1762) — instrumental, vocal and didactic — in full critical editions, to celebrate the 250th anniversary of the composer's death in 2012. 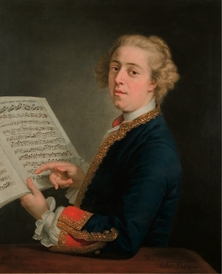 Although Geminiani was held to be the equal of Corelli in his own day — and indeed thought by some to be superior to his contemporary Handel in instrumental composition — his considerable output has only been available in piecemeal fashion, much of it never reissued since his lifetime except in facsimile. Largely inaccessible to the modern performer, the enormous originality he showed both in writing and re-writing his own music, and that of Corelli, his teacher, has been concealed. Francesco Geminiani Opera Omnia is the first uniform and accurate scholarly edition of all versions of his music and writings in a form that allows pertinent comparison and re-evaluation.

Opus 5 is one such collection that benefits from the co-publication of its various incarnations, in this case as cello sonatas and violin sonatas. Without the evidence of the title page stating clearly that the latter were "transposed for the violin with such changes as are appropriate and necessary for that instrument" it would be natural to assume that the violin versions were Geminiani's original, and the cello versions a transcription; in fact, the six sonatas of Opus 5 are Geminiani's only solo works for cello. Four of the cello sonatas are transposed in their violin version, but not by the obvious expedient of simply raising the tonality by a fifth. All the sonatas, including the two that remain in their original keys, are substantially recomposed and a comparison of any pair of equivalent sonatas illustrates Geminiani’s acute sense of the distinctive character of each instrument. 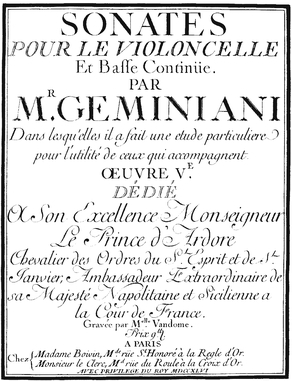 Setting the precedent for the series, the volume — Geminiani Opera Omnia Volume 5 — includes a full critical commentary and facsimiles, together with an introduction. An Appendix explains how Geminiani sought protection of his works in a society where international copyright did not exist and where publishing piracy was rife; Geminiani was the first composer to initiate legal proceedings to protect his works and by the time Opus 5 was published he was the most legally-protexted composer of the century. Printing privileges are shown in their original English, French and Dutch, just as in future volumes didactic treatises issued in English will be accompanied by any Italian, French and German translations of the period.

Next in the series to be published will be Volume 8, which presents Geminiani's 6 Concertos after Corelli Opp. 1 & 3, the 3 Select Concertos and the 2 Unison Concertos. Musikmesse Frankfurt runs March 24-27, 2010.