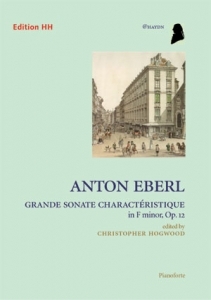 Christopher's latest edition to be published by Edition HH is now available.

The Grande Sonate Charactéristique in F minor was published between Eberl's visits to Russia, and dedicated to Haydn, possibly in gratitude for his reported praise of Eberl’s opera Die Königin der schwarzen Inseln which had just been staged in Vienna. Its more obvious target, however, might well have been Beethoven’s Grande Sonate Pathétique which had appeared in 1799; the dotted rhythms of Eberl’s Grave maestoso introduction pay clear tribute to the earlier work.

To buy a copy of the edition, please visit Edition HH