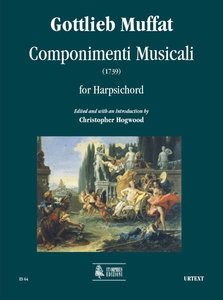 If Handel 'took other men's pebbles and polished them into diamonds' (Boyce), he chose to work with some already remarkable quarry: the Componimenti Musicali was, according to Chrysander, 'one of the very best harpsichord works of the age', its material borrowed by Handel not only for the Ode but also for, among others, Samson, Joshua and the Concerti Grossi Op. 6.

Despite its ultra-modest title — simply Musical Compositions — Muffat himself described the 1739 publication of his Componimenti Musicali as 'the most beautiful product to be met with in all Germany'. It was patently one of the most lavish and cosmopolitan productions of all 18th-century music printing; with paper of large format and high quality, an extravagant title-page, meticulous and calligraphic engraving, prefaces in several languages and a dedication to the Holy Roman Emperor, Muffat aimed to set it apart from other volumes of keyboard music of this period such as Couperin's Pièces de Clavecin or Bach's Klavierübung, and also from his earlier collection of versetts and toccatas aimed at the professional church musician (72 Versetl sammt 12 Toccaten, Vienna, 1726). The Componimenti represent a polished selection from his secular keyboard music and the publication was directed at the royal household. His title-page proudly announces that he was not only Organista di Corte e Camera (i.e. in public and private) to the Emperor, but also Maestro di Cembalo to the two arch-duchesses, Maria Theresa and her sister Maria Anna.

Christopher's edition reproduces in facsimile the title- and dedicatory pages of the original print, and the additional manuscript suite, transcribed by kind permission of the Sing-Akademie zu Berlin, reveals how carefully Muffat polished his own pebbles for a publication worthy not only of an Emperor but of Handel's flattering appropriation. 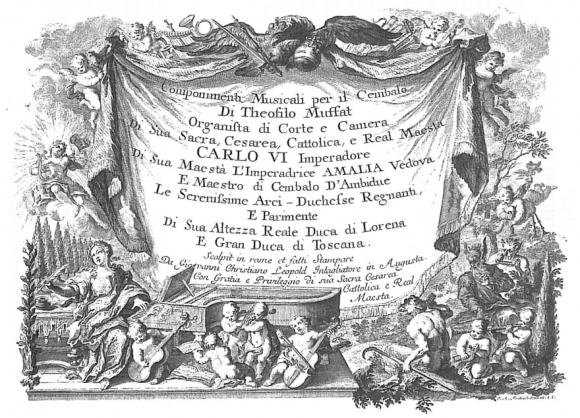 Title-page of Componimenti Musicali per il Cembalo, engraved by Jacob Andreas Fridrich, the Elder (1684-1751) and published by Johann Christian Leopold in Augsburg, showing a woman inspired at the harpsichord (Musica?) surrounded by putti playing guitar, violin, cello and (?) recorder. To the right are more rustic instruments (bagpipe, hurdy-gurdy, pan-pipes and a small alphorn) and at the top a medley of courtly brass, wind and stringed instruments.