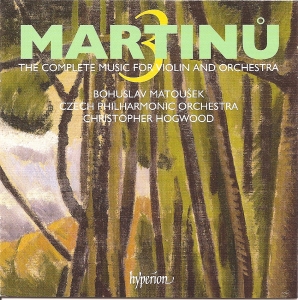 In addition to Christopher's latest Martinů CD being made Editor's Choice in July's issue of Gramophone magazine, it was also reviewed on BBC Radio 3's programme CD Review. The programme details and playlist can be found by clicking on the relevant link on the following page: CD Review.
For the Gramophone review, please continue reading here:

Martinů's Suite concertante has as chequered a history as any work I know. Commissioned in 1938 by Samuel Dushkin – who premiered Stravinsky's Concerto and for whom Martinů had already written his then-still-unperformed First Concerto – Martinů planned a set of five Czech dances for violin and orchestra. Completed in early 1939, Dushkin's efforts to secure a performance proved vain until 1943, and then in a violin-with-piano reduction, the orchestral version (minus its central Scherzo-caprice which is lost) only being premiered in 2000. Dushkin requested a revision but received a new four-movement (1943-44) of which only the opening movement has much connection with its precursor. Successfully premiered in 1945 and published, the new Suite languished unplayed until 1999.

I am at a loss to explain such neglect. Both versions are delightful, appealing in idiom, avoiding full-concerto gravitas and brightly scored. The first version's Meditation is rather elegiac and may, as Ales Brezina suggests in the booklet, reflect Martinů's faltering liaison with his former pupil, Vítezslava Kaprálová. Matoušek, who premiered the first version and revived the second (recording it with Hogwood for Supraphon), plays both with great understanding and finesse: the music needs lightness of touch and receives it here. Both versions of the Suite run out somewhat longer than Dushkin's projected timings but the tempi feel right.

In the Rhapsody-Concerto Matoušek shows himself as adept a viola-player as he is violinist, sweeter-toned than Telecky and a match for Imai and Bukac. Hogwood and the Czech Philharmonic again provide immaculate accompaniments, Hyperion's sound in Prague's Rudolfinum preferable to BIS's in Malmö. (The rivals are all mixed-composer discs.) This third volume in Hyperion's invaluable series is as desirable as its predecessors: highly recommended.

To read a review from the Times from 10 May, please visit Times Online

To read the sleeve notes click on the Read More button