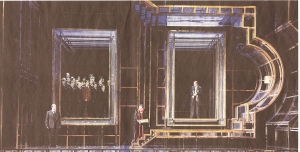 There have been many reviews of La Cemenza di Tito in the German press. Here are four extracts of reviews, translated into English by James Day.

‘...At the centre [of the performance] is the Leipzig Gewandhaus Orchestra, with Christopher Hogwood at the helm. He is not the first ‘period-performance’ maestro to have occupied the rostrum with them, but he is the first who has proved on the other side of the Augustusplatz that Leipzig’s showcase orchestra can satisfy the demands of period performance. The orchestral texture was vivid, bright, lively and transparent. Vibrato was the exception rather than the rule and even then it was at the service of emotional expression., as was everything else in this stern, sage opera.'

‘...[the production] was not aiming at bland beauty of sound, but at substance and content. Hogwood nurtures both. The players react sensitively, delicately and with such a secure sense of style that one would have thought they had never played in any other way.'

‘...Somewhere in the middle of the overture, which already provides a clear indication of the verve, attention to detail and transparency which Hogwood has achieved with the Gewandhaus Orchestra, a ciné projection of one of the ‘rooms’ provides us with the opportunity actually to observe from above how a young woman casts her garment aside and dives into a pool. . .’

‘...In conductor Christopher Hogwood, Mozart has an expert, precise and skilled interpreter at his disposal . This early-music specialist is less well-known for his work in the opera-house, but he conveys very precisely the accentuation and the moods, handles the intricate structure and development with care and plumbs the depths of the richly-nuanced score.'

'. . .Enthusiasm and applause throughout the ranks. It’s a long time since an opera has been received with such whole-hearted approval in Leipzig as Mozart’s La Clemenza di Tito at the premiere on 25 January 2008. The enthusiasm was directed above all at the very good soloists and their willing collaborators of the Gewandhaus Orchestra under Christopher Hogwood. This outstanding conductor knew exactly how to blend insight and attention to detail in presenting Mozart’s music in all its formal perfection and clarity of expression. Thanks to his balanced but never excessively purist approach to historically-informed performance the music flowed onward with a grace and elegance that was nimble, light in texture and in the best sense ‘well-tempered’. This alone was without any doubt enough in itself to make the occasion a highlight of the opera season.'