Christopher's 'gentle authority' of direction is 'the lasting memory' of an 'enthralling' Arianna performed at the Barbican on May 17 and to be heard on BBC Radio 3 at 2pm on September 24. 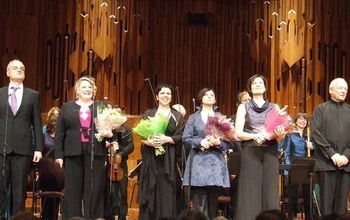 One of the success stories of the Barbican's 'Great Performers' series over the past three years has been the Academy of Ancient Music's exploration of lesser-known Handel operas (directed by Christopher Hogwood), one from each decade (Amadigi, then Flavio, re de' Langobardi), and intended as a build-up to this anniversary. Lesser-known operas are generally lesser-known for a reason, and this was no exception. Although it is unlikely to make a Handel top-ten, it nonetheless has some spectacular vocal numbers, no doubt intended to show off Handel's singers. Miah Persson and Kristina Hammarström were outstanding in the roles of Arianna and Teseo, the latter having some particularly agile vocal writing to cope with. Inevitably, we had the Barbican curse of having a 'big-name' singer pull out (do they actually book these singers?), although, equally inevitably, I found myself impressed by the replacement, in this case Marina de Liso (as Tauride), as I also was with Sonia Prina. Bass Antonio Abete spent most of the evening being naughty, which he did very well. As with the two previous AAM/Barbican operas, it was the direction of Christopher Hogwood that will be the lasting memory. The AAM is one of those orchestras which in recent times have adopted what for me is a rather forced and pushy style of playing, so it was refreshing to have direction from a conductor with gentle authority who devoted his energy to allowing the music to flow, without stooping to the antics of some of his younger colleagues. Although, in theory, their performance of Arianna in Creta (17 May) was the last of the series, I hope that the AAM and their Emeritus Director remain regular visitors to the Barbican. Unusually for my concert reviews, readers will be able to decide if I am talking nonsense as this concert will be broadcast as part of the BBC Radio 3 Handel opera series on 24 September at 2pm. I hope you find it as enthralling as I did.