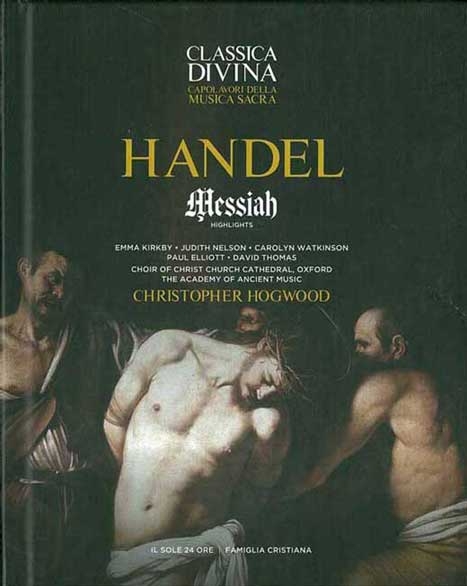 Here below is the English version of a note written by Christopher especially for this re-release.

“The finest Composition of Musick that ever was heard"

For many music lovers, Handel's Messiah is to oratorio what the Nutcracker is to ballet, an entertainment without which no Christmas is complete. Messiah is certainly more than music; it has achieved cult status, as an icon of choral worship, and it often seems to have become more of a social ritual than a Christian experience. As listeners we are always audience, never congregation. Yet it possesses to an extraordinary degree those two most disparate elements of art, spontaneous power and premeditated plan, which never fail to ignite more than mere musical enthusiasm.

Messiah is not a typical Handel oratorio; there are no named characters, as were usually to be found in his settings of Old Testament stories, possibly to avoid charges of blasphemy. It is a meditation rather than a drama of personalities, lyrical in method; the narration of the story is carried on by implication, and there is no dialogue.

Credit for the compilation of this extraordinary text must be handed to Charles Jennens, an outspoken, and much maligned friend of Handel. He was a wealthy country gentleman, with a large country estate and an elegant London house. He hid neither his wealth, nor his views, and for his ostentation came to be known as "Solyman the Magnificent". The worthiness of Jennens' text is proved by the fact that although Handel over the years made changes to the music (usually in the interests of pacing, or the arrival of new solo voices), he hardly ever felt the need to add or subtract a single word.

After the first public rehearsal of Messiah, on April 9, 1742, the Dublin Journal reported that it "was allowed by the greatest Judges to be the finest Composition of Musick that ever was heard". Jennens was less than overwhelmed by the work; he declared to a friend: "His Messiah has disappointed me, being set in great hast[e], tho' he said he would be a year about it, & make it the best of all his Compositions. I shall put no more Sacred Words into his hands, to be thus abus'd..."

Time, however, has proved Messiah to be immortal, though open to every vagary of interpretation. It has survived all indignities of amputation, truncation and re- orchestration, the use of elephantine forces and Wagnerian delivery -- even the foolish ritual of standing during, rather than after, the "Hallelujah" chorus, a habit that was first noted in the nineteenth century and has nothing to do with Handel.

To best represent Handel's intentions and vision, I would recommend making use of a text, both verbal and musical, that represents his unadulterated intentions (but still offers his alternatives) and allows him the sonorities he expected with boys’ voices, period instruments, appropriate ornamentation and a real feeling for the drama of this timeless story.