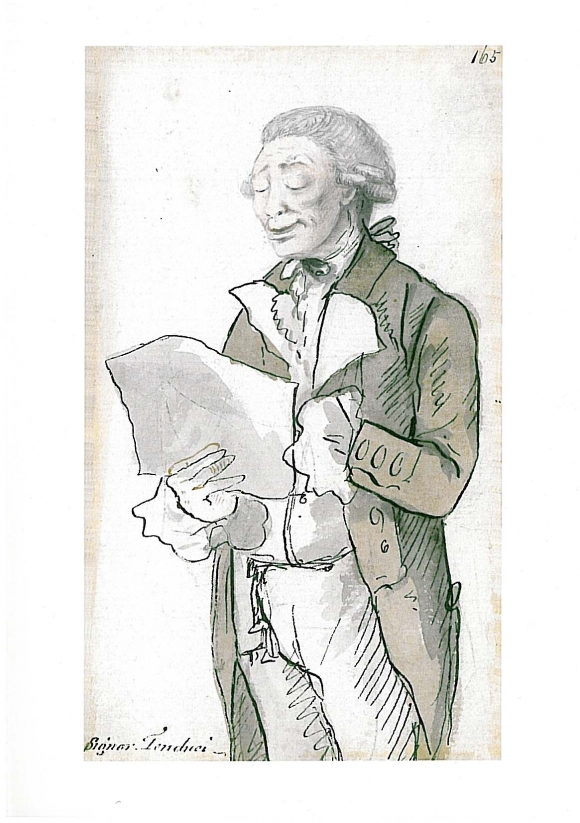 Numbered "165" in top right hand corner, but "164" in Nixon's hand on the original blue paper mount. An earlier sketch for this portrait is in the Foundling Museum, London, and an engraving taken from the finished portrait was issued on New Year's Day 1796 by E & S Harding.

Giusto Ferdinando Tenducci, born c.1735 in Siena, was an outstanding soprano castrato who first appeared in Britain in 1758. Both J. C. Bach and Mozart composed works for him; he was painted by Gainsborough and described in Smollett's Humphry Clinker (1771) by the heroine Lydia Melford after a visit to Ranelagh Gardens:

There I heard the famous Tenducci, a thing from Italy — it looks for all the world like a man, though they say it is not... It warbled so divinely that, while I listened, I really thought myself in Paradise.

Tenducci was responsible for popularizing 'Che farò' from Gluck's Orfeo but his extravagant living led to a short term in debtor's prison. In 1766 he scandalised high society by marrying Dora Maundsell (and, according to Cassanova, fathering two children). His wife supplied full details in A true and genuine narrative of [the marriage and subsequent proceedings of] Mr and Mrs Tenducci. In a letter to a friend at Bath... [1768]. He died in Genoa in 1790.