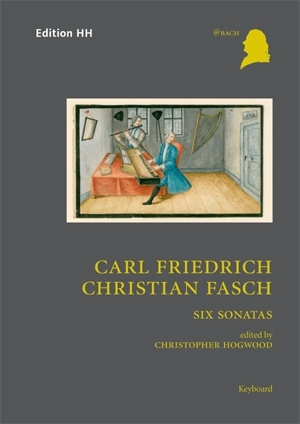 Fasch the younger (1736-1800), pupil and colleague of C.P.E. Bach in Hamburg, left only a few keyboard works for posterity since, on his deathbed, he asked his pupil Zelter to burn the contents of his music cabinet. This volume, the first of three, contains six sonatas that appeared in various prints during his lifetime and are also in an autograph MSS containing interesting variants; these are incorporated either in the body of the print, as also is the second version of the third movement of No. 4. or in the extensive critical commentary. All are in major keys (not exceeding two flats or one sharp) and in three movements (fast, slow, fast), apart from the first, which has an added minuet and trio. In No. 6, each movement is given a title of a personage in the manner of C.P.E. Bach's character pieces; at only five pages, it is by far the shortest, the final movement encompassing a mere sixteen bars.

The opening and closing allegros contain the characteristically nervous rhythmic and textural discontinuity with some abrupt changes. Quite widely spaced, two-part writing occurs frequently, as does a preludial-style melodic line of single notes divided between the hands; tricky hand shifts are necessary in several instances. The slow movements, through composed in Nos. 1-5 and a rondeau with couplets in No. 6, offer some highly dramatic moments, particularly No. 1, with its sweeping scale runs in sixty-fourth and one-hundred-twenty-eighth notes. No. 2 contains sharply dotted chordal writing, No. 4 repeated eighth-note chords, and No. 5 is a lyrical andante in 9/8.

A wide range of ornaments (the trill with prefix or suffix is frequently indicated) and articulation signs is used, the execution of which is covered in a table in the introduction. There is also a wide range of dynamic markings, which make these pieces particularly suited to the clavichord, as recommended in the posthumous edition by Rellstab (a well-balanced critical contemporary review is included here).

In addition to the execution and integration of the ornamentation, these pieces pose further technical challenges in several places, including ornaments in inner parts (as in the second and third movements of No. 4), and the use of the thumb as a pivot, particularly in the single-note lines. The slow movement of No. 2 requires a stretch of a tenth between the held alto dotted half and the treble quarter notes. The composer's skill was attested to by such figures as Kirnberger and Reichardt, and this skill is evidenced in several movements, however, perseverance with the trickier passages will reap dividends. There is plenty of opportunity in each movement for the application of the phrasing and articulation available to the clavichordist.

The introduction gives a good overview of the composer's life, and provides the illuminating preface from Rellstab's 1805 edition of these six sonatas. The comprehensive critical notes offer alternative readings of some passages, taken from secondary and autograph sources. Not as quirkily "fantastic" or inventive as C.P.E. Bach's sonatas (but not predictable either), these sonatas reveal their intricacies after a few playings; they are of a higher standard of workmanship than those by many of his contemporaries. Five facsimiles, including autographs showing variants from the printed version, are a useful addition. The printing is of the usual clarity associated with Edition HH, and the volume is in the now familiar spiral binding with a wrap-over cover. The tireless efforts of Christopher Hogwood and his team of assistants, and the publisher Per Hartmanm, in making this repertoire available in such excellent editions deserve our thanks and appreciation.

Reviewed by John Collins for Clavichord International, Volume 16, Number 1, May 2012