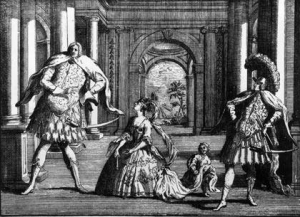 On 15 and 17 April Christopher conducted performances of Handel’s opera Flavio with the Academy of Ancient Music (avid readers of the site will have read the recent article on these pages about Christopher’s appearance on BBC Radio 3’s ‘In Tune’ programme). This was the second in Christopher’s three-year cycle of Handel operas with the AAM, with Arianna still to come in 2009. These reviews appeared following the concerts in Birmingham and London.

‘…Flavio himself was sung by Iestyn Davies, one of a remarkable pair of countertenors (the other was Robin Blaze in a lovelorn role) to grace Tuesday’s performance in the exquisitely accommodating Town Hall. James Gilchrist, who seems everywhere at the moment, was vivid and vituperative as the put-upon Ugone…and Maite Beaumont was frank and open-voiced as her swain Vitige. But the plaudits must go the Karina Gauvin as Emilia (the opera’s originally-planned title), bitter and torn in her expression of wide-ranging emotion. Christopher Hogwood conducted an AAM of wonderfully sprung agility. Oboes cooed like turtle-doves, the flute cast a pastel spell, and the theorbo rasped tellingly in the well-paced recitatives. It was refreshing that there was no “listen to me” element to the appropriate ornamentation of da capo arias. This was an account all about drama.’ Christopher Morley [Above left: Iestyn Davies] 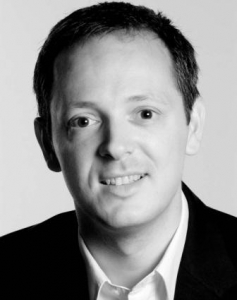 ‘…Buoyantly conducted by Christopher Hogwood and vivaciously played by the Academy of Ancient Music, this performance had plenty of panache. Seven stylish soloists relished every note: invidiously, I would single out the elegant timbre of the countertenor Robin Blaze and the sumptuous soprano Karina Gauvin, whose deliquescent singing of two gorgeously melancholy arias in the second act was the evening’s musical highlight.’ Rupert Christiansen 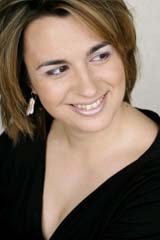 ‘…with the evergreen Christopher Hogwood conducting an on-form Academy of Ancient Music, this performance couldn’t be faulted for energy or stylishness. I have reservations about semi-staged concerts…But the countertenor Iestyn Davies as a firm-toned Flavio, the outstandingly intelligent Spanish mezzo Maite Beaumont as the resolute suitor Vitige, James Rutherford growling (…) as the vengeful courtier, Lotario, and James Gilchrist stealing the laughs as the perpetually affronted Ugone – all these sustained effective characterisations…

…Karina Gauvin proved to have an ardent voice and bags of appealing musicality.’ Richard Morrison

'I went to the Birmingham Town Hall performance of this concert and agree that whilst this is perhaps not Handel's best opera, the muscial execution was faultless to my ear. However, I disagree that the music was unnoteworthy and point out that a number of arias are generally accepted to be some of his best (or at least appear in compilation CDs titled as such) including 'Bel Contento'. The plot is slightly unbelievable, but it is a comic opera and therefore has to have an element of hilarity. Because of the fact the opera was unstaged, much of this comic impact may have been lost, except for the subtle use of small props and facial expressions. Overall it was a thoroughly enjoyable performance which I am sure could gain wider appeal if staged more regularly. The best singers in my opinion were Karina Gauvin and Robin Blaze.'

‘As far as Handel operas go, there’s hardly a stone left unturned, and thanks are due in a large part to musicologist, harpsichordist and all-around Baroque-and-roller, Christopher Hogwood…

…The AAM accompanied a fine cast. Many will have been disappointed by the indisposition of Sandrine Piau, one of the most elegant of Baroque sopranos… but Karina Gauvin provided a more than adequate replacement in the role of Emilia. Renata Pokupic’s Teodata was enjoyable…but Maite Beaumont was more remarkable: her voice is big, bold (Broadway, almost) but sensitively deployed, and her delivery was pitched to perfection as the amorous young courtier, Vitige. Elsewhere, James Gilchrist sang well as Ugone, Robin Blaze’s smooth and nimble counter-tenor got a good work-out in the part of Guido, and Iestyn Davies (soon to play Ottone in Glyndebourne’s L’incoronazione di Poppea), though fruitier toned, was impressive nonetheless as the ill-fated Flavio.

Courtly flourishes, come-hither looks, and huffy departures from the music stand all helped to guide the audience through the plot and provided the odd moment of welcome humour. Three hours of little-known Handel might have been a daunting prospect for some…but Hogwood and his ensemble offered a confident, vivid, and engaging performance.’ Laura Battle

'The Academy of Ancient Music's one-off performance of Handel's opera Flavio at the Barbican was a complete sell out. Packed to the rafters, the audience buzzed with excitement, waiting for the slightly altered line-up; Sandrine Piau was replaced at the last minute by Karina Gauvin. After what seemed a slightly rushed beginning — Christopher Hogwood starting up before the singers even has a chance to sit down it was an enthusiastic performance from Hagwood, with some beautifui ensemble playing from the AAM.

As this is one of Handel's lesser-known operas, and one he is rumoured to have completed only a week before its first performance, there was a definite feeling within the audience of discovering something unknown and special. The plot to this tragicomedy is fairly simple — the normal scenario of love triangles and jealousy, a spot of murder and a neat reconciliation to tidy it all up at the end. However, the slight banality of the plot did not, in my opinion, take anything away from what is undeniably some sublime musical writing and a great performance.

Maite Beaumont (playing Vitage) and Renata Pokupic (playing Teodata) began with a beautifully balanced duet, and despite this being an unstaged performance, they interjected just enough acting, movement, and interaction between them to bring the plot and sentiments of the arias to life. This style was continued by each of the singers in turn, who successfully infused a sense of acting and drama into the performance.

Robin Blaze (Guido) produced a confident and full countertenor tone with some beautifully flowing faster passages and persuasive acting. In line with the comical spirit of the opera and the relatively warm and relaxed atmosphere of this performance, there was a ripple of laughter from the audience as one of the oboists took on a momentary silent role, presenting an envelope to Guido. Still more laughter ensued as this envelope was revealed to contain a Proms-style British flag. Hogwood seemed entirely relaxed in his conducting. Indeed he seemed to be enjoying himself very much, demonstrating a strong relationship with the orchestra. He seemed to know the music so well, conducting not only from the score but from the heart. Intuitive conducting such as this is surely the leading force, inspiring a performance with such magical quality.

His manipulation of the tempo was perfect at every change — whisking the audience up with the exhilaration of faster passages, and allowing the singers sufficient space in the slower arias to fully express the emotions within the text. Even on the occasion I feared too ambitious a pace had been set, it was never too much for the singers. James Gilchrist (Ugone) sang with great passion and vigour in his first aria, despite the breakneck pace set by the orchestra. The continuo playing was pleasantly tight throughout and particularly sensitively and expressively executed by cellist, Joseph Crouch. Although each of the singers contributed something different to the performance, one stood out for me above the others. Both the rich tone of Maite Beaumont's voice and her wonderful ability to express the emotions of her character made her performance truly captivating. Part of her success surely must lie in her freeness from the music — she barely glanced at the score during her arias. Others were much less confident in knowing the music, thus she had the edge in expressive communication.

The death of Lotario, it's fair to say, definitely veered on the side of comedy rather than tragedy. Thankfully, this can only have been the way they intended it, and, probably given the friendly atmosphere of this performance, it was not a horribly comic experience but was in fact well received by the audience, who embraced the deliberately half-hearted depiction of his death. This joke was continued with a knowing laugh between audience and singer at the reappearance of Lotario at the dénouement of the opera to sing the final chorus with the rest of the cast.

This comedic ending was representative of the mood of the evening as a whole — a stunning performance of some truly beautiful music but set within a warm, friendly atmosphere on stage that permeated into the audience. An audience that very much appreciated this combination too — rapturous applause resounded around the hall, in a way that was more effusive and genuine than I have heard in a very long time.' Claudine Nightingale

In an article by James Fenton on changing fortunes in Handel operas, the following passage noted the recent AAM performance at the Barbican:

'As for the operas, matters were even worse. The operas were dead. "Occasional attempts at revival, although revealing untold glories to musicians of sober and patient tastes, have only shown that there is no hope of ever restoring these works to a stage which no longer resorts to extravagant sumptuousness of production for its own sake, nor has any use for the stiff formality of endless successions of da capo arias."

Handel's fortune really was at its nadir when his supporters, not his detractors, spoke in this way. Blom goes on: "The fact is that Handel's operas are merely so many secular oratorios in costume, on the whole less dramatic than the oratorios themselves because they lack the choral climaxes, and that we might as well think of building flats and factories in the baroque manner as of putting them on stage again except occasionally and experimentally."

I was thinking of this passage during Christopher Hogwood's concert performance of Handel's Flavio, re de' Langobardi at the Barbican a few days ago. A succession, yes, although not an endless succession, of arias; a plot that was of no great concern to the audience; rather little recitative; but a fluent and unhesitating progression through the score, which came over like a succession of demonstrations: this is what it is like to be angry, to feel vengeful, to be in love, to mourn, to be triumphant. It was like an unfolding essay in the emotions, acted out both through the singing voices and through the descriptive power of the orchestration.

The practice of concert performances of rare operas, with or without some element of acting, of semi-staging (in this case largely confined to some interaction between the singers, according to the demands of the script) — how simple it all seemed to achieve. How unproblematic. How impossible (it would appear) to predict in 1935.' James Fenton