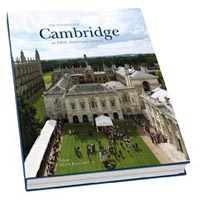 The University Of Cambridge: an 800th Anniversary Portrait traces the development of the university from the Middle Ages to the modern day. It contains anecdotes from many past undergraduate and research students, including a contribution by Christopher which can be found below.

The sight of the choristers of King‘s College processing from the Chapel after singing an evening service or anthem by Orlando Gibbons always carries (for me, at least) an extra historical frisson, realising that four hundred years earlier Gibbons himself at the age of 13 had been one of those choristers and had sung in this very same building (he was listed from 1596-9).

The presence of the past used to strike many an undergraduate of my generation in their final summer term while listening to the fading strains of Sweet Suffolk Owl or The Silver Swan as the punts of the Madrigal Society (founded 1928, regrettably dissolved 1968) disappeared into the distance downriver. It still grips millions each year worldwide who tune in to the broadcast service of Nine Lessons and Carols, now entering its second century. Continuity is implicit in this frisson, but the atmosphere within the institution diverges increasingly from the pressures of the world outside, where the arts become more a refuge, less a recreation.

Chapel and chapel choirs remain the most permanent feature of Cambridge‘s active music-making, in the process training many later professional voices, organ scholars and periodically producing close-harmony groups hoping to hit it as rich as the King‘s Singers.

A second strand of continuity is the University’s recognition of composition and living composers. I remember Britten, Tippett and Lutoslawski, receiving their honorary doctorates, just as earlier members of the University might have remembered Dvorák, Tchaikovsky, Saint-Saens or Ravel, their careers rotundly summarised in a Latin Oration. The post of Professor of Music was created in 1684 when Charles II demanded that Nicholas Staggins, his Master of Music, be awarded a MusD; the University retaliated by appointing him public Professor without salary. Since then the majority of appointments have also been composers (Maurice Greene, Thomas Walmisley, William Sterndale Bennet, Charles Villiers Stanford and, most recently, Alexander Goehr). This tradition was first broken in 1926 by the musicologist E. J. Dent and later by Thurston Dart (1962), both of whom overflowed academic barriers and busied themselves in “extra-mural” events: Dent with the ISCM and opera (at the same time presiding in 1926 over the first Music School “since the foundation of the University”), Thurston Dart with editing early music, international performance and recording.

In the first years it was not obligatory for the Professor of Music to be resident in the University. Even Stanford, who as Organist of Trinity had worked so hard to encourage student performances, later fell out with the authorities and took to giving his harmony classes at the station before making the speediest possible return to London. Originally there had been no formal tuition, and a candidate for the Mus.B came to Cambridge solely to present his composition (an “exercise”), and usually paid for its performance as well. Until full-time music courses were initiated as recently as 1947, students could only come to music after several preparatory years in another discipline. Vaughan Williams (Trinity, 189?) had to read history before he could proceed to music.

The Music Faculty now offers studies in history, analysis and compositional techniques as a springboard for diversifying into fields such as performance practice, early music, film music, jazz, the psychology of music and ethnomusicology. Not everyone reading music intends to become a professional; the prospectus mentions “financial and/or management careers“ as possible other occupations, but the diplomatic service and deep-sea diving have also benefited.

It is the live music of Cambridge which occupies and entertains the majority of students — and here the word is change rather than continuity, a flurry of maximum bravado (and usually minimum rehearsal) crammed into the few weeks of term and dependant on the time and talents of the natural impresarios. The most long-standing organisations are the Musical Society (CUMS, with symphony and chamber orchestras, wind ensemble and chorus), the Music Club (CUMC, with regular recitals by and for its members), the University Opera Society (formerly Group) and the very British Gilbert & Sullivan Society. Other ventures have proved more transitory: the Cambridge Little Opera Group (possibly doomed by its unfortunate initials), the Decadent Music Union, the In Nomine Singers, the Purcell Society…

Some fifty associations are currently listed, including the Brass Band Society, the Chinese Orchestra Society, the Hip-Hop Society and Homerton College Pandemonium Steel Pan Band. The common features are that they are open to all, vulnerable to the variable state of college music-making and financing, yet constantly producing natural leaders, who learn by trial and discordant error to control and mould the input of their peer musicians for whom music is not a chosen discipline, but simply a part of cultural life.

Energy and resourcefulness are the hallmarks of college music —Wagner with 11 players and four singers, a full performance of Purcell’s Fairy Queen or Satie’s Vexations. My first hearing of the final scenes of Don Giovanni, was at a college musical evening, when the entry of the Commendatore (now a distinguished Law Lord) from the Dean’s bathroom nearly brought the piano accompaniment to a halt.

Other University musicians achieved extra-mural fame: Raymond Leppard (Monteverdi operas), David Munrow (Early Music Consort and BBC) and now Christopher Page (Gothic Voices carried on to become ‘popularisers‘, doing for music what Glyn Daniels did for archaeology or Stephen Hawking continues to do for cosmology. But it was never obligatory to be a member of the Music Faculty in order to take part in the practical music-making of Cambridge (some indeed have naughtily proposed that the reverse is true), just as it often turns out that a graduate in maths, Classics or Eng. Lit. may go on to a career as a professional musician. Of recent names such as John Eliot Gardiner, Andrew Davis, Anthony Pay, David Munrow, Roger Norrington, Emma Johnson, Robin Ticciati and Andrew Manze, fewer than half read music.

Cambridge music has always mixed town with gown. A famous caricature of a Concert at Christ‘s in 1767 shows the virtuoso Georg Noëlli playing the pantaleon with local professionals; the town music club organised performances in The Black Bear in the 18th and 19th centuries; the Cambridge Philharmonic was founded in 1833 and continues today; there were Thursday Concerts in the Guildhall where we regularly heard the Amadeus Quartet or Julius Katchen; and the annual Folk Festival has been going strong since 1965. Much was changed by the creation of a dedicated concert hall as part of the new Faculty buildings on the West Road site (1977), now home to professional series, regular opera and countless undergraduate ventures, with a range of musicians in residence (at the moment the Endellion String Quartet, the Britten Sinfonia and the Academy of Ancient Music). It has noticeably helped the rise of opera productions here; in addition to regular Handel operas, a recent student production of The Turn of the Screw showed how finely tuned high tension can be generated on a low-voltage budget.

In this (like most academics) I have omitted mention of the pop world, although it is probable that the names of Cambridge town products such as Syd Barrett and Pink Floyd carry more resonance in the world than several centuries of University musicians combined. Similarly the name of the Fitzwilliam Museum is probably familiar to many musicians (for the Fitzwilliam Virginal Book, only one of its many important holdings), unaware that it is in Cambridge and a splendid location for lunchtime recitals.

From sublime chapel singing down to the scrawniest college quartet, Cambridge demonstrates that effective and rewarding music-making is here the province of the amateur. As a Fellow of Trinity so modestly put it in the 17th Century:

“We have good Musick and Musicians here,
If not the best, as good as any where”
(Nicholas Hookes, “To Mr. Lilly,
Musick-Master in Cambridge”,
in Amanda, 1653)