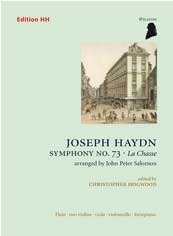 Following Christopher's four "symphony quintetto" editions already issued, this new volume of one of Haydn’s favourite works, as arranged by John Peter Salomon (the composer's concert-master), is the first modern publication in full score with parts, and uses the recently discovered autograph.

Scored for flute, string quartet and keyboard, the arrangement convincingly brings the grandness of an orchestral symphony to a chamber setting. The keyboard contribution is optional, though effective, and the ingenuity with which the strings and flute accommodate Haydn’s full orchestral writing is a genuine tribute to Salomon’s skill.

A significant addition to the repertoire of sociable Hausmusik, this fine arrangement will also be a delight for professionals in concert.