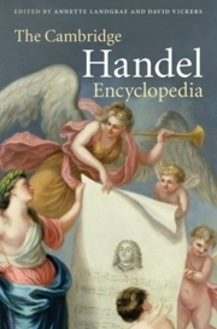 We are told that Beethoven pointed at his Arnold edition of Handel and declared ‘Handel is the greatest and most capable composer; from him I can still learn’. Today we seem to have lost the art of praising Handel; even our most ardent Handelian anoraks find it difficult to applaud their hero in the sort of terms that for earlier generations were second nature. Faced with The Apotheosis of Handel — that familiar 1787 engraving with the laurel wreath, the supporting angels, the upturned eyes — we simply blush and turn to the critical notes, hoping they will let us off the hook.

During his lifetime Handel was subjected to extremes of both reverence and dismissal— from Goupy’s caricature of the glutton seated at the organ, to Roubiliac’s sculpture of the great composer which took its place in Vauxhall Gardens alongside Homer and Milton (all three blind). But Roubiliac immortalised Handel in a remarkably informal pose, relaxed, wearing slippers and free from his wig, as a reminder that, though larger than life, he was still living and, though unique, very human.

Who cou’d like Handel with such art controul
The various passions of the warring soul?
With sounds each intellectual storm assuage,
Fire us with holy rapture, or with rage?


This question, posed by an anonymous poet writing On the Death of Mr Handel in 1759, was very specifically musical in its praise. A century later the eulogies had become much more generic, more moral than musical:

this was a man who had done honour to music as much by the nobility of his character as by the sublimity of his genius. He was one of the too few artists who uphold the dignity of art to the highest possible standard. He was the incarnation of honesty. The unswerving rigidity of his conduct captivates even those who do not take him for a model. He worked ceaselessly for the improvement of others without ever feeling weary. He was virtuous and pure, proud and intrepid. His love of good was as unconquerable as his will. He died at his post, working to the last hour of his life. He has left behind him a luminous track and a noble example.

This was the Rev. T. Hanley Ball speaking to the Wimbledon Village Club in 1864, whose Victorian superlatives would be more acceptable were we not so aware that they were often used not so much to praise the past, but to slay the present, and criticize (or at least minimize) the products of later writers. “The works of Haydn, Beethoven, Mozart, Mendelssohn, Spohr, and others — great masters — are performed, and they are admired, and justly so, but they have not the hold upon the taste and feelings (of Englishmen at least) that Handel has“, wrote Dean Ramsey in 1862, adding, in a pre-echo of Elvis-mania: “He is the greatest, and the favourite. He stands alone.“ William Crotch agreed: “The choruses of Mozart and Beethoven are frequently magnificent, but seldom sublime”, and listening yet again to the opening of Zadok the Priest, it is hard to disagree that Handel stands highest.

These comments all come from a century whose essential listening experience was by and large limited to a smallish selection of Handel’s oratorios, a few instrumental concertos and his keyboard works. The more recent re-discovery of Handel’s operas during the twentieth century initially set the cause back through appearing to demonstrate that, as far as the modern theatre was concerned, they were archaic constructions that failed to hold water and needed drastic surgery and cosmetic changes before they could be presented. To a certain extent this opinion still survives, although some operations are nowadays more sympathetic to the patient than others. “Critical appraisal“ may have faulted some of Handel’s librettos, just as “moral appraisal” had earlier been brought to bear on his liberal “borrowings” of musical material from others, both living and dead — with similarly negative conclusions — but our awareness of the breadth of Handel’s output is now greater than at any previous period, including his own lifetime.

We are also more voluminously informed than ever before on every aspect of his work and life. My own passion for Handel’s music was first sparked by the sheer power of the product — rather like an encounter with a vintage 8-litre Bentley — immediately followed by a desire to see under the bonnet, and to admire, if not to understand, the source of this power. I thus have one foot in the “Handel is the greatest” camp and the other in the critical world of present-day scholarship. On Handel’s moral supremacy we are now allowed to be sceptical or noncommittal, but on the nuts-and-bolts approach to composing — at which he wins hands down — we are surrounded by eager and well-informed researchers, and almost overwhelmed with facts and theories demanding our attention. For me (and I hope for you) such a ready-reference volume as the present publication makes the perfect Baedeker.