There has been widespread consternation in the music world at the news that the the V&A plans to break up the collection that has been fostered since they bought their first instrument in 1856. A petition to the Prime Minister has been written and signed by many, including Christopher. The museum has issued a statement saying that the instruments are being moved to make way for more fashion on the basis that they are a museum for the decorative arts, and fashion is more fitting for that description. Read Ben Hoyle's article in The Times for more information.

Christopher, who holds a personal affection for both the venue and its instruments, having played concerts and recorded CDs on the instruments there, believes it is important not to break up such a collection. His worry is that, as a result of the loss of official space in which to display the instruments, they will find themselves kept out of sight, under lock and key. These instruments, whilst being appreciable for an aesthetic value, are also of great importance to those academics, like Christopher, who want to revive the sound as well as view the sight of these important instruments. 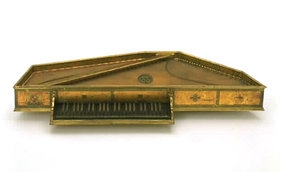 Click Here to listen to Christopher voice his opinions to Sean Rafferty on BBC Radio 3's In Tune.

The fate of the instrument gallery is still under discussion. You can sign the petition, or take action in person, to which end Judith Wardman of the British Clavichord Society advises members:

'Last chance to visit to the Musical Instrument Gallery and express your concern:


'Forgive me if you've already heard that there's a chance to demonstrate your concern about the V&A proposal this Thursday lunch-time, 4 February, 1 to 2pm. Meet at the entrance to the instrument gallery, where James Yorke of the V&A will be opening the gallery to the public for what seems to be the last time. Various organizers are suggesting that as many people as possible should turn up to protest at the closure and to pressure the museum to make the best possible arrangements for its instruments in the future.'