The revised edition of Christopher’s acclaimed biography on Handel, published by Thames & Hudson, is now available. The new edition includes fresh thoughts on Handel and his music, and reviews the latest Handel scholarship. 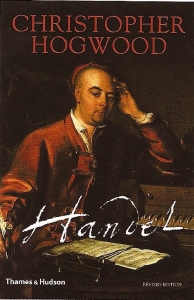 'One cannot always be praising Homer': thus the over-enthusiasm of nineteenth-century Handelians was countered, somewhat wearily, by Franz Liszt. Hagiography, posthumous fictions and picaresque novels are the legacy of these zealots in Handel's cause, for whom the Myth overshadowed attempts at studied biography and musical documentation which might have led them closer to Handel the Man. Even in his own lifetime Handel passed from being an individual to an institution, and eventually a complete industry; since his death, a reputation founded on endless repetitions of a small core of compositions has held Handel firmly captive. His compositions, according to Sir Donald Tovey's calculations, equal almost all those of Bach plus all of Beethoven – yet the overwhelming public preference for just one work has meant that most of this great output remains unfamiliar. 'His reputation is unshakably founded on one piece — Messiah — which represents an infinitesimal part of his enormous output, and yet which so comprehensively represents it that further exploration of his music never ultimately adds much' (The Spectator 12 May 1984). Hallowed by the traditions of two centuries, misconceptions of this kind still represent the popular image of Handel today, totally ignoring the major arena of his work...

...Since 1984, the heightened awareness of Handel's operatic genius that we prayed for in the last century seems finally to have come about and many positions have changed, including my own.

Extracts from the Preface, written by Christopher Hogwood.