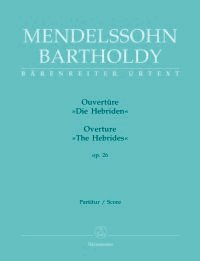 Of all Mendelssohn’s orchestral pieces, the Hebrides overture poses the greatest problems for the editor. While the opening theme — famously presented in a short score in a letter to his family of 7 August 1829 — may seem to epitomize the composer’s supposedly effortless creativity, the work as a whole underwent a stringent and protracted process of revision. The full score was completed in December 1830, yet the overture was to go through at least five further guises prior to its publication in 1835. Since both the surviving autographs (dated 16 December 1830 and 20 June 1832) served as working scores for later revisions, neither presents one of the six versions of the work in a pure form; moreover, Mendelssohn’s mania for last-minute revisions was such that he introduced further changes at proof stage, with the result that the 1835 printed orchestral parts and full score diverge significantly.

It is only since 2002, when the 1832 autograph became accessible again to scholars through its purchase by the Bodleian Library, that a more complete picture of the work’s gestation has begun to emerge. In the light of this, John Michael Cooper has presented a painstaking and comprehensive reappraisal of the sources; equally indispensable is Christopher Hogwood’s new edition, which has clearly benefited greatly from Cooper’s findings. While the new availability of the 1832 autograph clarifies the composition history of the overture, it does not make the editor’s task any more straightforward. One of the strengths of Hogwood’s edition is that it conveys, graphically and transparently, the illusory nature of any attempt to present a definitive version of the Hebrides overture. Rather than following the lead of Julius Rietz, whose 1874 text constructs an ideal version of the work, Hogwood’s edition enables the study and performance of four distinct versions. He presents two scores of the overture, each of which gives two variants (labelling these ‘Rome versions’, pp. 1–44, and ‘London versions’, pp.45–95).

Hogwood’s labelling, while convenient, inevitably oversimplifies the relationship between his texts and the sources (Cooper’s more detailed survey of the sources identifies Rome, Rome-Paris, London, London-Berlin, Berlin-Leipzig, and Leipzig versions of the overture). In addition, it should be stressed that the work was never performed in either of the so-called Rome versions, while the likely text of the London performances of May and June 1832 can only be reconstructed hypothetically. But although textual questions remain, Hogwood’s critical commentary is the first to identify all the variants, while his texts enable non-specialists to engage with the complex compositional history of the work. As a result, we can better understand how the work’s unique stylistic world evolved, and the poetic and programmatic content that Mendelssohn intended it to convey.

The provisional nature of the first version was acknowledged by Mendelssohn, who identified the final section of the exposition as irrelevant bluster and felt the artifice of other passages to detract from the atmosphere he sought to evoke (p.v). These concerns motivated the most extensive revisions: the rewriting of the end of the exposition (whose first version has more in common with a celebratory piece of occasional music than with the picturesque opening), and the removal of imitative treatments of the opening theme in the transition to the second subject. Other revisions, too, seem motivated by the poetic content. The sharpening of the rhythms at the climax of the development, as well as the addition of fanfare-like material elsewhere, confirms the picture suggested by the shifting titles of the overture (from Die Hebriden or the Ouvertüre zu der einsamen Insel in the earliest versions to Fingals Höhle in the 1835 full score): Mendelssohn’s original intention to create a musical seascape increasingly acquired Ossianic resonances.

In addition to discussing the revision process, Hogwood’s introduction very usefully presents a programme note by George Grove, written for a Crystal Palace concert in October 1871 in which two versions of the overture were given side by side (pp.viii–x). Grove’s comparison comes down heavily in favour of the later version; a curiosity of Hogwood’s edition is that it seemingly grants equal validity to his Rome and London versions, aiming ‘to provide performers with all musically pertinent readings to this complex composition’ (p. 96). While Hogwood’s even-handedness has resulted in a fine resource for scholars and students, it seems unlikely that many orchestras will seek to recreate Grove’s 1871 concert. Indeed — given the availability of orchestral parts of the new edition — it is worth exploring whether orchestras seeking to perform the work in its later form will benefit from investing in them. In short, what advantages does Hogwood’s second London version have over existing editions?

Performers have hitherto relied on materials derived from Rietz’s text for the Breitkopf & Härtel complete edition, a source that Hogwood, like most Mendelssohn scholars, damns as uncritical and corrupt (p. iii). But while Rietz’s editorial procedures hardly meet the standards of modern scholarship, it is important not to exaggerate the extent of his interventions. Rietz’s edition is problematic not primarily on account of textual flaws but because his additions and alterations were made tacitly, His emendations to The Hebrides are in fact sparse and trivial in nature: the addition of expressive markings (e,g., ‘tranquillo assai’ at the return of the second subject (bar 201)); the occasional replacement of terraced dynamics with more gradual contrasts (e.g., bars 146–147); and, more straightforwardly, the standardization of expressive marks. Rietz’s decision to preserve the version of bars 7 and 8 found in both the autographs, rather than to incorporate Mendelssohn’s last-minute reversion to the melodic line of his sketch of August 1829, is typical of his approach: musical preferences take precedence over philological principles. Hogwood’s ‘London’ version, in contrast, sticks with the published 1835 version of these bars, though it retains the familiar line as an ossia. In spite of their diverging editorial criteria, there are few other substantive differences between this version and Rietz’s text. Indeed, there are several places in Hogwood’s edition where Rietz’s approach to dynamics might usefully have been adopted (viola players will have to pencil in a diminuendo in bar 20, for example, and there are other places where editorial dynamics are needed).

Mendelssohn scholarship has been considerably enriched by this volume and its companions (at the time of writing, the publication of the final of the seven volumes in Hogwood’s series of Mendelssohn’s concert overtures, Meeresstille und glückliche Fahrt, is imminent). It is to be hoped that an enterprising record company encourages Hogwood to record all the early versions that he has unearthed, and that his editions will encourage orchestras and listeners to reappraise these works.