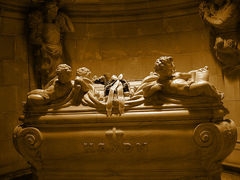 Despite gloomy news elsewhere, the Financial Times recently turned its attention to the literary response to the 200th anniversary of Haydn's death and was pleased to find

'The enthusiasm for and knowledge of the music that the English conductor-harpsichordist Christopher Hogwood communicates in the concert hall are reflected in Haydn's Visits to England, a brisk and breezy roundup of contemporary source material for the composer's two action-packed London residencies in the early 1790s. This was the period that sealed Haydn's international celebrity: he was lionised by English high society in a way that makes his long service at the Esterházy court seem prosaic and his condescending recognition by the imperial family in Vienna quite scandalous. England gave his music an urbanity and daring it had hitherto lacked. Without those "London" symphonies and the late, quasi-orchestral string quartets, not to mention the two great pantheistic oratorios on English texts, Haydn’s reputation would be that of a minor composer.

'Hogwood's is the only volume to quote extensively from the notebooks Haydn made during his visits to Britain, and they are more than worth the read, for they speak to us, unadulterated, of his meticulousness, his industriousness, his innate curiosity, his flawless propriety, his fundamental modesty and his dutifulness – the quality that impelled him, exhausted by London's non-stop demands and charms, to return to a quieter life at home.'