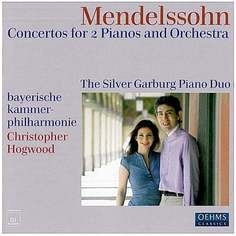 Christopher's CD of Mendelssoh Piano Duos, recorded with the Silver Garburg Duo and the bayerische kammerphilharmonie was released in November 2009 and has since received excellent reviews. "The two musicians [Silver and Garburg] play this vivacious and sparkling music in an extremely fresh and lively manner, giving an outstandingly textured and minutely coordinated performance. They are attentively and precisely accompanied by the Bayerische Kammerphilharmonie under the direction of the versatile grand master Christopher Hogwood." (Michael Wersin, translated from Rondo-Magazin).

"The E major work has an engaging and lively finale, needing just the wit and the sense of not taking things to seriously which Sivan Silver and Gil Garburg bring to it.....and they play [the works] with enthusiasm but also with real appreciation of the young composer's musical intelligence. Obviously there are problems of balance, but these are skillfully solved, with the two pianos cleanly differentiated and set against an orchestra not too large in size and expertly controlled by Christopher Hogwood. The sound is clear and bright, the sense of enjoyment, not excluding an element of showing off in the music, dominating the proceedings. Presumably it was some lack of demand that prevented the concertos being published until long after Mendelssohn's death, in the 1960's, and of course they make for expensive programming, but they are well worth hearing." (John Warrack, International Record Review).