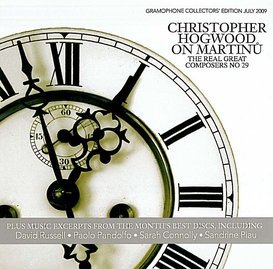 In July's issue, Gramophone continues its series of 'The Real Great Composers' with a half-hour, cover-disc interview between Christopher and James Jolly on Martinů.

Arguably Martinů would be enjoying greater exposure in his anniversary year were he not sharing it with Purcell, Handel, Haydn and Mendelssohn; but Christopher has long been an admirer, with numerous recordings to his name, and a place among the Board of Editors of the Bohuslav Martinů Foundation, currently preparing the Complete Edition of the composer’s works.