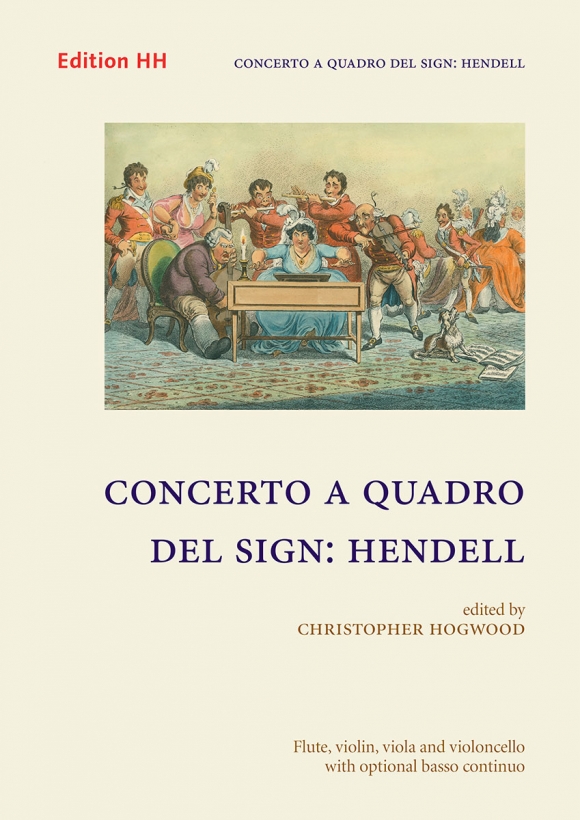 Presumably having started life as a concerto for the standard Baroque forces of flute, strings and continuo, this Concerto a Quadro, now otherwise unknown, is preserved in its surviving form for flute, violin, viola and cello in a set of manuscript parts apparently copied by a Swedish amateur musician in the 1760s and now part of Christopher's collection. Although unlikely to be the work of Handel, as a rare early example of music for flute quartet it is an attractive extension to a repertoire otherwise dominated by the works of Mozart and his contemporaries.

In the present publication, editorial figuring in the cello part allows for the possibility of expanding the texture with additional continuo instruments, and the edition is complemented by an Introduction, Critical Commentary and facsimiles from the manuscript parts.

The cover image is a reproduction of Playing in Parts (1801) by James Gillray (1756–1815), a hand-coloured etching based on a watercolour of the same name by Brownlow North (1778–1829) showing only the central trio of violin, cello and fortepiano; Gillray's design is much altered and elaborated by the addition of several other figures including two flautists reading from the score and a dog, who appears to have commandeered all the separate parts. From the collection of Christopher Hogwood.