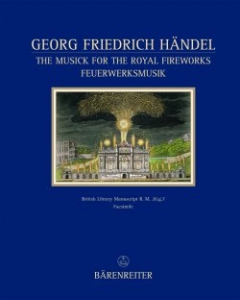 If you missed it, it is still not too late for you to hear Christopher talk on Radio 4, for the programme Random Edition, about Handel's Musick for the Royal Fireworks. The series, presented by John Snow, examines stories provided by archive newspapers. This particular programme, broadcast on 2 January 2008, takes the story in a Penny London Post newspaper from 1749 and examines the various elements of the great event that was the Royal Fireworks in London's Green Park - from music to location, and technicalities to politics.

Click on the link below to listen again to the broadcast:


The picture here shows the cover of Christopher's facsimile edition of the Musick for the Royal Fireworks, published by Bärenreiter.