Anton Eberl (1765-1807) was nine years younger than Mozart; he was also a child prodigy, and became a friend and probably a pupil of the older man. The family friendship was evidently very strong, and after Mozart's death, Eberl toured Germany with Mozart's widow Constanze and her sister Aloysia in 1795-6. Maybe it is no surprise, then, that a number of Eberl's works were thought to have been composed by Mozart, and Eberl himself issued protests to the press about these attributions on a number of occasions.

The op.46 Toccata exists in two posthumous prints of 1807 and 1809 – no autograph has yet been found. One edition subtitles the work Toccata fugata, and the quasi-fugal texture may be an acknowledgment of Mozart's great interest in fugal writing in his later years; there is no question that Eberl must have absorbed many of Mozart's stylistic traits. The Toccata is an example of the great flowering of fugal writing at this time, produced by composers inspired by studying the works of J S Bach — one thinks of C P E Bach, Antonin Reicha, and a number of French composers of the Revolutionary period, not to mention Mozart, Haydn and Beethoven. Eberl's Toccata also shares with some of these works a delight in modulation to far distant keys. 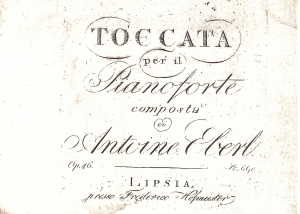 This edition is nicely produced, with clear printing on good paper. The introduction is in both English and German, and provides a good, succinct background to the music and the composer. There are reproductions of an engraving of Eberl, and of the title page and first page of music from the Hofmeister print of Leipzig (c1803).

Stylistically the music appears closer to the world of Beethoven and Schubert than that of Mozart, which is perhaps not surprising if this is indeed a late work. I am also struck by certain melodic shapes and accompanimental figures which remind me of the music of John Field. I wonder if Eberl heard Field and Clementi either in St Petersburg in 1802, or in Vienna during their journeying around Europe at this time? It would seem quite likely, and Field, in any case, had made a considerable impression with his playing, so that some of his music might have been in circulation at this time.

While much of the piece moves in continuous semiquavers, there is ample variety of texture and invention. The Toccata is not too difficult – certainly not beyond about Grade 8 – and is an attractive work which will repay learning; audiences, too, will undoubtedly enjoy it.

For more information on The Dolmetsch Foundation visit their website