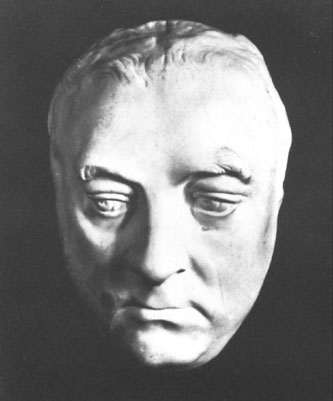 "I thought in this anniversary year 'celebrating' his death it would be nice to ask questions like 'what did he die of?', 'how did he live?', 'what about his love life?'.

"Handel was a terribly private person and clearly thought that the public had no right to know what happened in his house once he had closed the door.

"When you try to piece together the facts of his life it is sort of opposite to Mozart, who was a very open figure. There are terrible gaps [in our knowledge] and periods when we don't even know where Handel was.

"This major anniversary gives us the opportunity of presenting 'Handel the man', something which is rarely done. It is a true delight to be able to do so in the very rooms in which Handel lived and created the music that brought him international fame. The House is imbued with the atmosphere of Georgian London society, in which Handel was a commanding presence. So many episodes in Handel's life happened at 25 Brook Street and, of course, he died here 250 years ago."

Handel Reveal'd, which opened on April 8 and runs until October 25, was previewed by the press with morbid curiosity: 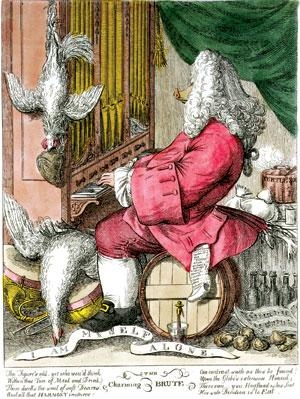 Above: Joseph Goupy, I Am Myself Alone, or The Charming Brute (Engraving of Handel, 1754)
Binge-eating and lead poisoning killed Handel (The Telegraph, April 2);

Tetchy, fat, paralytic. But Handel's poison was the lead in his wine, says historian (The Guardian, April 2);

The madness of George Frederic Handel (The Independent, April 2).

Retrospective diagnoses catching on, the story made it into New Scientist — How misery inspired Handel's Messiah (April 1) — and even www.contactlenses.co.uk — Handel's blindness (April 16).

However, The Times takes a broader (and less macabre) view by revealing How to build yourself a Handel (April 10).

Of course, this anniversary provides the platform for revealing not only Handel's character but also some unwarrantably under-performed works. As Christopher reminded us earlier this year, in NEMA's 2009 Yearbook, it is time, for example, to 'rescue that other great arena of dramatic and virtuoso vocal music, the private cantata, which the young Handel delivered so flamboyantly, and the older Handel borrowed from so regularly.'

It also remains for the public to re-evaluate Handel's operas, which have suffered at the hands of those practitioners who have compensated for their misunderstanding of the music by seeking to apologise for it with extraneous nudity and violence. In his continuing drive to prove the greatness of the operas, Christopher conducts Arianna in May, and is joined by AAM, with whom he performed Amadigi in 2007 and Flavio in 2008. Christopher's Acis and Galatea was recently very well-received at the Royal Opera House.

Not currently on the horizon for Christopher is Messiah, the work chosen for the anniversary concert at Westminster Abbey. With 300 performances to his credit, he recently told The Tablet (April 11) 'it's a pity' for, while it is still 'a superb piece, musically and dramatically', it remains 'over-featured, when the public, especially the British public, has a right to choose from 42 operas, 29 oratorios, or – most-neglected of all – more than 120 cantatas.'