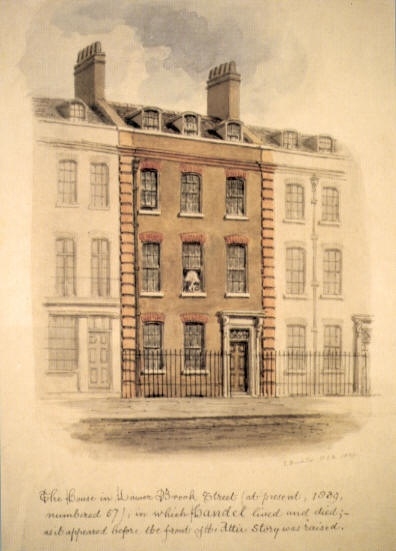 Christopher Hogwood CBE delivered the Stanley Sadie Memorial Lecture in the elegant surroundings of the Royal Institute to a packed audience of Handelian fans (if that is not too plebeian a word) with his usual blend of erudition and humour. He did not want us to think that he would be laying down the law as to how Handel should be performed, but rather would be telling us how Handel was being performed at various times through the ages. Handel was an ideal subject for this study because almost uniquely he had never "left the stage" since his own time.

We were treated to several carefully compiled selections of Handel's music, from an 1888 recording with a 3,000 strong choir to an audience of 23,722 to up-to-date recordings made in the last few years. Descriptions ranged from the forces used in the first centenary celebration in 1774 (slight miscalculation) with roughly 30 professional singers and 30 orchestral players, including only 4 violins and 2 oboes, to a monster orchestra to support a vast choir of amateur singers from every part of the Kingdom. Burney was quoted to support the early descriptions.

Mozart used Messiah as a vehicle for showing off his compositional virtuosity by adding possibly inappropriate additional instruments and richer harmonies, typically in the aria 'The people who walked in darkness' which Handel probably meant to be scored rather bleakly to achieve contrast with "a great light."

Changes had been made to voice types and Mr Hogwood particularly missed the quality of true contraltos like Clara Butt and Monica Sinclair. He did not feel that counter tenors whose use outside the church context would probably have amazed Handel were at all appropriate. He also felt that performing staged versions of oratorios risked destroying Handel's dramatic intentions. Handel would never have left the chorus standing uncomfortably on stage while the soloist performed a long da capo aria.

The study of writings by Ernest Irving who wrote the music accompanying the 1942 film The Great Mr Handel had some interesting things to say about his thought processes even though he seems to have not always been well informed about what instrumentation Handel had actually used. The writings of Thomas Beecham and Malcolm Sergeant were quoted. Both had introduced changes which were more about their personal preference than any attempt to fulfil Handel's intentions. It was interesting to be told that Mendelssohn had taken some risks in offending Moscheles by refusing to be led into introducing post composition editorial changes - clearly on the side of the Angels.

In the 1960s and 70s the rise of Historically Informed Performance has led to some stripping away of incorrect performance practice. An early exponent was Arnold Dolmetsch who introduced the concept of double dotting and adding trills and ornaments on the grounds that they were consistent with the conventions of the time even if not specifically written out. The use of “correct instruments" had its pitfalls too. The right instrument in the wrong hand could be disastrous.

Mr Hogwood made a plea that scholars should be listened to, as they were often able to guide performers into more appropriate practices than just using their instincts. The practice of imitating which seems common today had problems if the model used had its own errors. He also felt that although Handel was a giant we should make more of an attempt to revive the music of Handel's contemporaries like Handel pasticcios produced by J C Smith, Leo, Vinci and Hasse, not to mention the music of Arne and Festing. Instead of repeating the same works more effort should be made to uncover works like Handel's 100 cantatas so far unperformed.

The talk was very enthusiastically received.