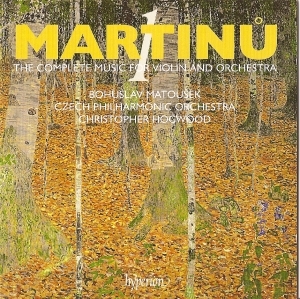 'This release is desirable not only for Bohuslav Matoušek’s total identification with Martinů’s idiom - his rhythmic confidence, technical security (especially in high positions), and a lyrical sweetness that never turns cloying (in both slow movements) - but also for the crisp, snappy playing of the Czech Philharmonic under Christopher Hogwood, arguably today’s preeminent Martinů conductor (how about a symphony cycle, Hyperion?).'

Soon to be published is Christopher’s new edition of the complete ballet music for La Revue de Cuisine, which has previously only been available in the form of an extracted suite (Leduc, Paris), and he is currently working on a new edition of the Sinfonia Concertante, for violin, cello, oboe, bassoon and small orchestra as one of the first issues of the new Bohuslav Martinů Complete Edition

Throughout the year, Martinů will feature in Christopher’s concert programming, beginning with the Metropolitan Orchestra, Lisbon, and followed by Stuttgart Radio SO and the Britten Sinfonia. He continues his work with the Martinů Foundation in Prague which is committed to producing a complete Urtext edition of the composer’s works, and highlighting his music in a series of festivals and conferences throughout the world during this 50th anniversary of his death.

News of the other anniversaries of 2009 and Christopher’s involvement in them will come in the next month's web News; expect plenty of Mendelssohn, Haydn, Handel and Purcell.

Martinů's two violin concertos have very different histories. The First was created for Dushkin in 1931, much tinkered with over the next few years and then "lost" until Halbreich unearthed it in 1968. The Second (1943) was written in just two months for Mischa Elman, premiered before the year was out and taken up by several violinists soon afterwards, often being programmed unnumbered until its predecessor came to light.

Josef Suk set the benchmark for both but his recordings, still in the Supraphon catalogue, have been overtaken by this newcomer and, in No 2, by Isabelle Faust's superb recent account (Harmonia Mundi, 8/08). Matoušek and Hogwood certainly have the measure of both scores and in the Second run Faust and Belohlavek close. I do like the latter's expansive approach in the central Andante moderato where Matoušek and Hogwood are two minutes swifter (and Suk and Neumann faster still) but I really cannot choose between them. Couplings may prove decisive, not least the best available Toccata e Due Canzone (Faust) or the Viola Rhapsody-Concerto (Suk); my recommendation is for the Hyperion set as a whole (Vol 3 includes the Rhapsody-Concerto) but I would not want to be without the Harmonia Mundi. Concerto No 1 was formerly available on Supraphon with the Suite Concertante's second version included on Vol 3 (7/08), although the published recording dates of the Suite suggested otherwise (Hyperion says it is correcting this on future issues). Strongly recommended.

The only serious competition for this disc, the final installment in Hyperion’s splendid four-volume survey of Martinů’s complete music for solo violin and orchestra, comes from Josef Suk’s classic Supraphon versions with this same orchestra under Vaclav Neumann. There is very little to choose between them, as both are excellent, but collectors may well want to hear these pieces in finely balanced digital sound. Jennifer Koh’s recording of the Second Concerto on Cedille, coupled to works by Szymanowski and Bartók, is also first-rate and worth consideration.

This release is desirable not only for Bohuslav Matoušek’s total identification with Martinů’s idiom—his rhythmic confidence, technical security (especially in high positions), and a lyrical sweetness that never turns cloying (in both slow movements)—but also for the crisp, snappy playing of the Czech Philharmonic under Christopher Hogwood, arguably today’s preeminent Martinů conductor (how about a symphony cycle, Hyperion?). These two works aren’t just two of the 20th century’s best violin concertos; they also offer a perfect synopsis of the composer’s mature style.

The First Concerto is a brash, spiky piece in Martinů’s “concerto grosso” mode, pitting the violin against small instrumental groups—including percussion—in every imaginable combination with unflagging rhythmic verve. The Second Concerto, written in the U.S. for Misha Elman, adopts a more lyrical idiom, with plenty of “golden age” Romantic virtuosity built in as well. Both are essential, as is this whole series. What a pleasure it is to see labels taking on and completing interesting, rewarding, and ambitious projects like this with such distinction. Bravo!