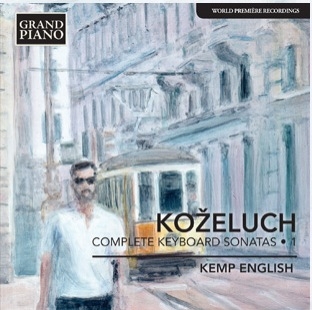 Few composers exemplified the late eighteenth-century Viennese keyboard style better than Mozart’s contemporary, the Czech composer Leopold Koželuch. A leading performer and teacher, he was even offered Mozart’s former post as court organist to the Archbishop of Salzburg. Preferring instead to preserve his independence he produced, over four decades, a series of major sonatas for fortepiano and harpsichord worthy to stand beside those of Haydn, Mozart, Clementi and Dussek, and as a precursor to those of Beethoven.

This is the first disc of the complete recording of Koželuch’s 50 keyboard sonatas. The second is due to be released in January 2014, and the rest at 2-monthly intervals thereafter. The sonatas are performed on original and replica instruments from the late eighteenth and early nineteenth century, several of which come from the performer's own collection (The Mobbs Keyboard Collection). This first disc contains Sonatas 1-4, found in Volume I of Christopher's edition; you can listen to a snippet of the 3rd movement of the Sonata No.2 in E flat major here.